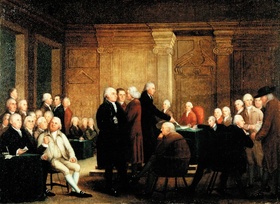 Listen to Episode 11 of Ned Ryun's podcast, History of the Constitutional Convention. It has a very good seventeen-minute overview of the life of James Wilson.

James Wilson, U.S. statesman and jurist, was born in 1742 in Carskerdo, Scotland. His parents were poor Presbyterian farmers and he was one of seven children. He graduated from the University of St. Andrews in 1757 and subsequently became a student at the Universities of Glasgow and Edinburgh studying Scottish Enlightenment thinkers. In 1765 he emigrated to British North America.

Landing at New York, he went to Philadelphia the following year. He taught Latin (1766 -67) at the Academy and College of Philadelphia (founded by Benjamin Franklin in 1749 and now known as the University of Pennsylvania). Simultaneously he studied law under John Dickinson and was admitted to the bar in 1767. Establishing himself first in Reading and then Carlisle, he rapidly rose to prominence.

He published Considerations on the Nature and Extent of the Legislative Authority of the British Parliament (Aug-1774), in which he argued that the colonists were indeed a part of the British Empire, but that Parliament had no constitutional power to legislate for the colonies. He asserted that though the colonists owed their allegiance to the monarch, they were self-governing. Essentially he laid out the theory of dominion status some 70 years before it was officially adopted as British policy. The pamphlet had a strong influence on the members of the First Continental Congress (5-Sep to 26-Oct-1774).

In May 1775 Wilson became a delegate to the Second Continental Congress. When a declaration of independence was first proposed by Congress he expressed the belief that a majority of the people of Pennsylvania were in favor of it. But since the instructions to the Pennsylvania delegates opposed such a declaration, he urged postponing any action until he could consult with the people back home. When the vote finally came (2-July-1776), he was able to affirm Pennsylvania's wish for independence. Of the 13 colonies voting, only New York was opposed.

Receiving a commission as colonel in the Pennsylvania militia (May-1775), Wilson raised a battalion of troops in his county of Cumberland. For a short time he took part in the New Jersey campaign with the Continental Army (1776). His principal work, however, was with Continental Congress. He was a appointed member of a committee to prepare an address to the colonies (Jan-1776), which he wrote; he served on a similar committee (May-1777) and wrote the address to the people of the United States, urging their firm support of the cause of Independence; he drafted the plan of treaty with France; he was a member of the Board of War (Jun-1776 to Sep-1777); he served as chairman of the Committee on Appeals to hear and determine appeals from the courts of admiralty in several states (Jan-1777 to Sep-1777). He was a member of many other committees as well.

Wilson lost his seat in Congress (Sep-1777) when the political faction in Pennsylvania that had opposed independence came to power. In 1779 he accepted a commission as Advocate-General for France. Until the close of the War he represented Louis XVI in all claims arising from the alliance with France.

Wilson was again elected to Congress in 1783 and 1785 – 86. He worked closely with Robert Morris in organizing the Bank of North America and was named one of the directors in the Act of Congress that incorporated it (31-Dec-1781). Though the bank was granted a charter by the Pennsylvania legislature, the charter was repealed in 1785. Wilson responded with a famous constitutional argument in which he sustained the constitutionality of the bank on the basis of the implied powers of Congress. The bank was re-chartered in 1787, but under restricted conditions that prevented it from performing its intended role as a central bank.

Wilson — along with Benjamin Franklin, Robert Morris, Gouverneur Morris, and four others — represented Pennsylvania at the Constitutional Convention in Philadelphia (25-May to 17-Sep-1787). He spoke often, clearly articulating his views about a strong central government. He favored the independence of the executive, legislative, and judicial branches, the supremacy of the federal government over the state governments, and the election of senators, as well as representatives, by the people. He was opposed to the election of the President or the judges by Congress. His political philosophy was based upon implicit confidence in the people, and he strove for such provisions as he thought would best guarantee a government by the people.

Wilson served on the Committee of Detail, which produced the first draft of the Constitution (Aug-1787). His most famous/infamous contribution, however, was the Three-Fifths Compromise (Jul-1787).

When the delegates became deadlocked over the representation of slaves, Wilson broke the impasse by proposing that each state count its slave population as three-fifths of the total — for purposes of taxation and apportioning representation in the House of Representatives and the Electoral College. The compromise kept the southern delegates from walking away from the Convention, but it embedded slavery into the Constitution and gave it a political life it did not previously have. Now there would be every reason for a state to increase its population of enslaved people.

Nevertheless, when Wilson pronounced the Constitution the best form of government which has ever been offered to the world, he was not wrong. And during the Pennsylvania ratification convention (21-Nov to 15-Dec-1787) he was the Constitution’s ablest defender.

In 1789, newly elected President Washington appointed Wilson to the U.S. Supreme Court as an Associate Justice, not as Chief Justice as he had wanted. Generally, his few written opinions while on the bench were brief — except for the key case of Chisolm v. Georgia (1793), in which he held that the people of the United States constituted a sovereign nation, not a mere confederacy of sovereign states.

He served on the Supreme Court until his death.

Wilson married twice, first to Rachel Bird (1771), with whom he had six children, and then six years after her death he married Hannah Gray (1793). Despite his intellectual prowess, he exercised poor judgement in business affairs. Though he had attained wealth from his law practice, he continually speculated in land and other investments. During the economic downturn of the late 1790s Wilson was so heavily in debt that he was briefly jailed. In 1798, while staying in Edenton, North Carolina, to escape creditors, he died of a stroke. He was 55.