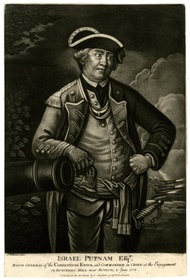 Israel Putnam, colonial militia soldier and general in the Continental Army, was born in Salem Village (now Danvers), Massachussetts, in 1718. His first American ancestor, from Aston Abbotts, Buckinghamshire, England, was one of the earliest settlers of Salem Village. In 1740 he moved to a farm in the present townships of Pomfret and Brooklyn, Connecticut.

In the winter of 1742 - 43 Putnam crawled into a wolf den with his feet secured by a rope (so he could be pulled out) and, according to the tradition, killed a she-wolf. In 1755 he enlisted as a private to fight in the French and Indian War, where he became a major. Known for his personal courage and for skill in Indian warfare, he was the hero of numerous exploits. In 1764, during Pontiac’s War, he commanded the Connecticut troops in the expedition under Colonel John Bradstreet to relieve Detroit.

During the escalating conflict with England in the 1760s, Putnam became a prominent member of the Sons of Liberty and a leader in the opposition to the Stamp Act of 1765. He held two terms, 1766 – 67, in the Connecticut General Assembly and increased his influence by opening a tavern — The General Wolfe — in Brooklyn, Connecticut.

As chairman of the Committee of Correspondence for Brooklyn parish, he took the Committee’s message and contributions to the Boston patriots in August 1774; in October he became lieutenant colonel in the Connecticut militia. On 20 April 1775 news of the fighting at Lexington and Concord the day before reached him at his farm while he was plowing a field: he instantly left the plow in the furrow and hastened to Cambridge to join the Patriot cause. He was given the rank of major general.

On 17 June he participated in the Battle of Bunker Hill. He was with the force, commanded by Colonel William Prescott, which had the night before fortified Breed’s Hill; the next day took a conspicuous part in resisting the British attack. Soon afterward, on his own authority, he occupied Prospect Hill, an important point for the Siege of Boston, in which he commanded the center (two brigades) of the American army at Cambridge.

After the evacuation by the British from Boston he was placed in command of New York City until Washington’s arrival (13-Apr-1776), and then was put in charge of the city’s fortifications. Immediately before the Battle of Long Island he succeeded General John Sullivan to command of the Continental Army troops at Brooklyn Heights. During the ensuing battle (27-Aug) his troops were routed by the British. During the retreat through Manhattan, Putnam commanded one of the three grand divisions and took part in the Battle of Harlem Heights (16-Sep).

In December 1776 he was ordered to Philadelphia to supervise the fortification of the city; from January to May 1777 he was stationed at Princeton, New Jersey. In May he took command of the Hudson Highlands at Peekskill, which, along with Forts Montgomery and Clinton, he had to abandon in October — both out-maneuvered by the British and weakened by Washington’s repeated demands for reinforcements.

In the spring of 1778 he was superseded by General Alexander McDougall, but in April a court of inquiry acquitted him of any fault, misconduct or negligence in connection with the loss of Forts Montgomery and Clinton. After a few months of recruiting service in Connecticut he returned to the main army at White Plains. He commanded the troops quartered near Redding, Connecticut, during the winter of 1778 – 79, and in May he took command of the right wing on the west side of the Hudson River.

In December 1779 an attack of paralysis terminated his active service in the war.

Israel Putnam spent his last years on his farm in Brooklyn, Connecticut, where he died in 1790 at the age of 72. A brave, intrepid, and very industrious soldier, Putnam was 57 when the American Revolution started and he was not a great general. But his fame in the Indian wars, his personal courage, his bluff heartiness, and his good-fellowship made him an idol of the rank and file, and a popular hero in American history.

Our cause is noble; it is the cause of mankind!