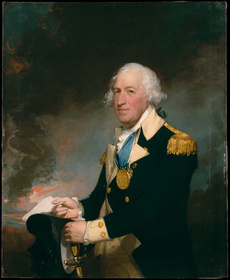 QUICK FACTS
BORN:
26 July 1727 in Maldon, Essex, England
DIED:
10 April 1806 in New York
Buried in the churchyard at Trinity Church, New York. The location of his grave is unknown, but a plaque dedicates his burial there.

Horatio Gates, American general, was born at Maldon in Essex, England, in 1728. He entered the English army at an early age, and was rapidly promoted. He accompanied General Braddock in his disastrous expedition against Fort Duquesne in 1755, and was severely wounded in the battle of 9 July — and he saw other active service in the Seven Years’ War.

After the peace of 1763 he purchased an estate in Virginia,where he lived till the outbreak of the War of Independence in 1775, when he was named by Congress adjutant-general. In 1776 he was appointed to command the troops which had lately retreated from Canada, and in August 1777, as a result of a successful intrigue, was appointed to supersede General Philip Schuyler in command of the Northern Department.

In the two battles of Saratoga his army defeated General Burgoyne, who, on 17 October, was forced to surrender his whole army. This success was, however, largely due to the previous maneuvers of General William Schuyler and to Gates’s subordinate officers.

The intrigues of the so-called Conway Cabal to replace George Washington with Gates completely failed. Gates was president for a time of the Board of War, and in 1780 was placed in chief command in the South. He was totally defeated at Camden, South Carolina, by Cornwallis on 17 August 1780, and in December was replaced by General Nathanael Greene, though an investigation into his conduct terminated in acquittal (1782).

He then retired to his Virginian estate, then moved to New York in 1790, after emancipating his slaves and providing for those who needed assistance. He died in New York in 1806.

In a land where horsemanship was often men’s touchiest point of pride, Jefferson had to admit he never saw Washington’s like for grace and control in the saddle. A froniter runner and Indian wrestler — his friend George Mercer described his frame as padded with well-developed muscles — Washington had by 1774 refined mere energy down to a grace of least movement, the higher athleticism of the dance. And he danced well.

It is a melancholy reflection that liberty should be equally exposed to danger whether the Government have too much or too little power.