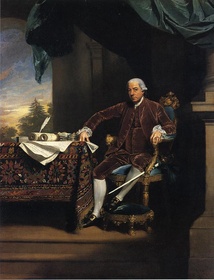 Henry Laurens, American statesman of Huguenot ancestry, was born in Charleston, South Carolina, in 1724. At age 16 he became a clerk in a counting-house in London and later returned to Charleston. There he became very successful and very rich as a partner in Austin & Laurens, the largest slave-trading house in North America.

Following the death of his wife in 1770, he retired from active business the next year and then spent three years traveling in Europe and superintending the education of his three sons in England. (The eldest, John, would later become a member of George Washington’s staff during the Revolutionary War.) In spite of his strong attachment to England, and although he had defended the 1765 Stamp Act — in the hope of averting war — Laurens united with 37 other prominent colonists in 1774 to petition to Parliament against the passing of the Boston Port Act. Becoming convinced that a peaceful settlement was impossible, he returned in 1774 to Mepkin Plantation, his estate near Charleston.

Laurens became involved in revolutionary politics and was elected to the Provincial Congress in 1775. He was made president of the Committee of Safety and, when South Carolina declared its independence, he served as the Vice President of the state (Mar-1776 to Jun-1777). Next, he was sent as a delegate to the Second Continental Congress at Philadelphia and became its second president (Nov-1777 to Dec 1778), succeeding John Hancock.

In 1780, as minister to the Dutch Republic, Laurens sought to negotiate a loan of ten million dollars on behalf of Congress. During his second voyage to Amsterdam, carrying a sketch of a U.S. – Dutch Treaty that had been drafted by William Lee, his ship was intercepted (3-Sep) by a British frigate off the banks of Newfoundland. Although he threw the incriminating papers into the ocean, they were retrieved. He was brought England, charged with treason, and imprisoned in the Tower of London. Britain also declared war on the Dutch.

During his confinement Laurens health rapidly declined. He was finally released on parole (31-Dec-1781) after an exchange for British General Charles Cornwallis — who had been captured at the Battle of Yorktown.

In June 1782 he was appointed one of the American commissioners for negotiating peace with Great Britain. He arrived in Paris, 28 November, a mere two days before the preliminaries of peace were signed by John Adams, Benjamin Franklin, John Jay, and himself. On the day of signing however, mindful of Southern interests, he was allowed to insert a clause that prohibited the British from carrying away any negroes or other property of American inhabitants. This subsequently led to appreciable contention between the British and American governments.

His health failing, Laurens did not remain for the signing of the definitive Treaty of Paris (3-Sep-1783), but returned to Mepkin Plantation. In his final years Laurens was asked participate in the Constitutional Convention of 1787, but declined. He did, however, serve at the state ratifying convention and voted for ratification — with South Carolina becoming the eighth state to ratify the Constitution (23-May-1788).

Henry Laurens died in 1792. According to his wishes he was cremated and buried at Mepkin.