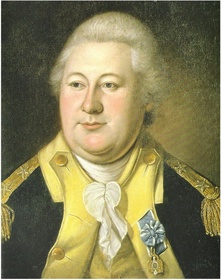 Henry Knox, American general, was born in Boston, Massachusetts, of Scottish-Irish parentage, in 1750. He was prominent in the colonial militia and tried to keep the Boston crowd and the British soldiers from the clash known as the Boston massacre (1770). In 1771 he opened the London Book-Store in Boston.

He had read much of tactics and strategy and joined the Continental Army, as a colonel, at the outbreak of the War of Independence. He fought at Bunker Hill, planned the defenses of the camps of the army before Boston, and brought from Lake George and border forts much-needed artillery.

At Trenton he crossed the river before the main body, and in the attack rendered such good service that he was made Brigadier General and Chief of Artillery the following day. He was present at Princeton; was chiefly responsible for the mistake in attacking the Chew House at Germantown; urged New York as the objective of the campaign of 1778; served with efficiency at Monmouth and at Yorktown; and after the surrender of Cornwallis was promoted to Major General. He also served as a commissioner on the exchange of prisoners.

His services throughout the war were of great value to the American cause; along with Nathanael Greene he was one of General Washington’s most trusted advisers.

From December 1783 until June 1784 he was the senior officer of the United States army. In April 1783 he had drafted a scheme of a society to be formed by the American and French officers who had served in America during the war, to be called the Cincinnati; of this society he was the first secretary-general (1783 – 99) and in 1805 became vice-president-general.

From 1785 to 1794 Knox was Secretary of War, both under the Articles of Confederation and during Washington’s presidency. He was unsuccessful in urging a national militia system to enroll all citizens over 18 and under 60 in the advanced corps, the main corps or the reserve, and for this as well his close friendship with Washington was bitterly assailed by the Republicans.

In 1793 he began to build a house, Montpelier, at Thomaston, Maine, where lived during his retirement beginning 1795. He speculated unsuccessfully in the holdings of the Eastern Land Association; he lived there until his death in 1806.

The question before the human race is, whether the God of nature shall govern the world by his own laws, or whether priests and kings shall rule it by fictitious miracles?