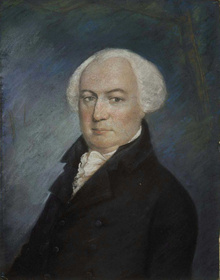 QUICK FACTS
BORN:
31 January 1752 at the family estate, Morrisania, in New York (now in the Bronx)
DIED:
6 November 1816 at Morrisania
Buried at St. Anne’s Church in the Bronx, New York.
AUTHOR OF
AUDIO

Listen to Episode 26 of Ned Ryun's podcast, History of the Constitutional Convention. It has a very good twenty-minute overview of the life of Gouverneur Morris.

Gouverneur Morris, American statesman and patriot, was born in the old Morrisania manor house, in what is now the Bronx in the city of New York, in 1752. He graduated from King's College (now Columbia University) in 1768, studied law, and was admitted to the bar in 1771. New York, then in the midst of the political disturbances which preceded the outbreak of the War of American Independence, offered a good opportunity for a public career, and Morris had the aristocratic connections which tradition required. An extreme aristocrat in his political views, he distrusted the democratic tendencies of the Whigs, but a firm belief in the justice of the American cause led him to join their ranks.

His great grandfather, Richard Morris, having fought in Cromwell's armies, emigrated to America upon the restoration of Charles II, and founded the manor of Morrisania, in what was then New Netherland. His grandfather, Lewis Morris (1671 – 1746), inherited the manor and also a large estate from his uncle in Monmouth county, East Jersey. He was an influential advocate of the surrender of the proprietary government of the Jerseys to the Crown and held a series of offices, including President of the New Jersey Council (1710 – 11). He was chief justice of New York from about 1720 until 1733, was sent to England by the popular party late in 1734 to present their grievances to the king, and was governor of New Jersey from 1738 until his death on 21 May 1746.

Gouverneur served in the New York Provincial Congress in 1776 – 77 and was perhaps the leading advocate in that body for a declaration of independence. After the Congress had become the Convention of the Representatives of the state of New York (July 1776), he served on the committee which prepared the first draft of the state constitution. He served in the Continental Congress in 1777 – 79, and was enthusiastic in his support of General Washington.

In 1778 he was selected chairman of the committee to treat with the conciliation commissioners of Lord North, and as such presented the famous report, adopted by a unanimous vote of Congress, which declared that the recognition of independence must precede any negotiations for peace. He settled in Philadelphia as a lawyer and in February 1780 he published a series of essays on finance, in which he criticized the issue of legal-tenders, denounced laws passed for the benefit of the debtor class, and urged the people to tax themselves for the common good.

From 1781 to 1785 he was assistant to Robert Morris (no relation), the superintendent of finance. In 1782 he prepared an elaborate report on the coinage, suggesting the use of the decimal system and of the terms dollar and cent. With some modifications introduced by Thomas Jefferson, notably the adoption of a higher unit of value (the dollar instead of one-tenth of a cent), this plan constitutes the basis of the present American system.

Morris was one of Pennsylvania's representatives in the Constitutional Convention of 1787, and took an active part in the debates. His influence was weakened, however, by his cynicism and by his ultra-aristocratic views. He favored a strong executive, an aristocratic senate appointed by the president for life, and the restriction of the suffrage to free-holders. The struggle which the frontier settlers of Pennsylvania had made in the state legislature to secure unlimited issues of paper money and the enactment of laws favorable to the debtor class prejudiced him against the West, and he tried to introduce into the constitution a clause guaranteeing forever the political supremacy of the states east of the Alleghenies. He was instrumental in securing the executive veto and in defeating the proposal that the legislature should elect the president. He also gave able support to the nationalistic and anti-slavery factions in the convention. He was the member of the committee of revision selected to draft the constitution in its final form, and that document is a monument to the vigor and simplicity of his literary style.

In 1787 he bought Morrisania from Staats Long Morris and returned to New York to live.

He went to France in February 1789 on private business, and remained abroad for nine years, passing most of the time in Paris, London, and the German capitals. In 1792 he acted as financial agent in a daring attempt to secure the escape of the king and queen from Paris. He was appointed United States minister to France in 1792, and was the only representative of a foreign country who remained at his post throughout the Reign of Terror; but his ill-concealed attitude of hostility to the Revolution gave offense, and in return for the recall of Genet at the request of the United States, the French government asked for the recall of Morris in 1794. Business and pleasure, however, still detained him in Europe for four years longer.

He returned to New York in 1798, resumed the practice of his profession, re-entered politics, and sat in the U.S. Senate as a Federalist from 1800 to 1803. Morris became interested in projects for improving the communication between the Hudson river and Lake Erie, and from 1810 to 1816 he was chairman of the board of canal commissioners, which after exploring the country, prepared plans for the Erie Canal. He was bitterly opposed to the war of 1812, and openly advocated the formation of a northern confederacy to escape the rule of the Virginia dynasty. He died at Morrisania in 1816.

By attacking slavery more fiercely than ever before, Revolutionary Americans freed tens of thousands of slaves. But the Revolution’s libertarian and egalitarian message had perverse consequences. It forced those Southerners who chose to retain slavery to fall back on the alleged racial deficiencies of blacks as a justification for an institution that hitherto they had taken for granted and had never before needed to justify. The anti-slavery movement that arose out of the Revolution inadvertently produced racism in America.