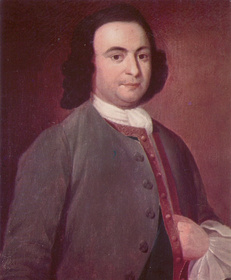 Portrait by Dominic W. Boudet
after the original by John Hesselius, c. 1750

George Mason, American patriot and statesman, was born in Stafford county (the part which is now Fairfax county), Virginia, in 1725. His family was of Royalist descent and emigrated to America after the execution of King Charles I. His colonial ancestors held official positions in the civil and military service of Virginia.

Mason was a near neighbor and a life-long friend of George Washington, though in later years they disagreed in politics. His large estates and high social standing, together with his personal ability, gave Mason great influence among the Virginia planters, and he became identified with many enterprises, such as the organization of the Ohio Company and the founding of Alexandria (1749). He was a member of the Virginia House of Burgesses in 1759 – 60. In 1769 he drew up for Washington a series of non-importation resolutions, which were adopted by the Virginia legislature. In July 1774 he wrote for a convention in Fairfax county a series of resolutions known as the Fairfax Resolves, in which he advocated a congress of the colonies and suggested non-intercourse with Great Britain, a policy subsequently adopted by Virginia and later by the Continental Congress.

In 1787 he was a member of the convention that framed the Federal Constitution, and as one of its ablest debaters took an active part in the work. Particularly notable was his opposition to the compromises in regard to slavery and the slave-trade. Indeed, like most of the prominent Virginians of the time, Mason was strongly in favor of the gradual abolition of slavery, though he himself owned slaves. He objected to the large and indefinite powers given by the completed Constitution to Congress, so he joined with Patrick Henry in opposing its ratification in the Virginia Convention (1788). Failing in this he suggested amendments, the substance of several of which was afterwards embodied in the present Bill of Rights.

Declining an appointment as a United States Senator from Virginia, he retired to his home, Gunston Hall (built by him about 1758 and named after the family home in Staffordshire, England), where he died in 1792.

In politics he was a radical republican, who believed that local government should be kept strong and central government weak; his democratic theories had much influence in Virginia and other southern and western states. Along with James Madison and Thomas Jefferson, Mason carried through the Virginia legislature measures disestablishing the Episcopal Church and protecting all forms of worship.

The most exciting scientific find of the period was Charles Willson Peale’s exhumation in 1801 near Newburgh, New York, of the bones of the mastodon, or mammoth. Peale displayed his mammoth in his celebrated museum and in 1806 painted a marvelous picture of what was perhaps the first organized exhumation in American history. Peale’s discovery electrified the country and put the word mammoth on everybody’s lips. A Philadelphia baker advertised the sale of mammoth bread. In Washington a mammoth eater ate forty-two eggs in ten minutes. And under the leadership of the Baptist preacher John Leland, the ladies of Cheshire, Massachusetts, late in 1801 sent to President Jefferson a mammoth cheese, six feet in diameter and nearly two feet thick and weighing 1,230 pounds.