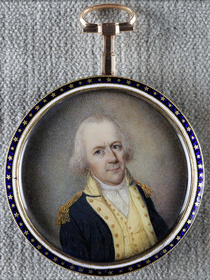 George Clinton, American soldier and political leader, was born in Little Britain, Ulster County (now Orange County) New York, in 1739. His father, Charles Clinton (1690 – 1773), who was born of English parents in County Longford, Ireland, emigrated to America in 1729, and commanded a regiment of provincial troops during the French and Indian War. The son went to sea at the age of sixteen, but, finding the sailor’s life distasteful, joined his father's regiment and accompanied him as lieutenant in the expedition against Fort Frontenac in 1758.

After the war Clinton practiced law in his native town and held a number of minor civil offices in Ulster county. From 1768 – 95 he sat in the New York provincial assembly, and in the controversies with Great Britain he zealously championed the colonial cause. In 1774 he was a member of the New York committee of correspondence, and in 1775 was chosen a member of the Second Continental Congress. In December 1775 he was appointed a brigadier general of militia by the New York Provincial Congress; the following summer, being ordered by General Washington to assist in the defense of New York, he left Philadelphia shortly after voting for the Declaration of Independence — but too soon to attach his signature to that document. He had also been chosen a deputy to the Provincial Congress (later the State Convention) for 1776 – 77, but other duties prevented his attendance.

General Clinton took part in the battle of White Plains (28-Oct-1776), and later was charged with the defense of the Highlands of the Hudson, where, along with De Witt Clinton, in October 1777, he offered a firm but unsuccessful resistance to the advance of Sir Henry Clinton. Earlier in the year (Mar-1777) he had been appointed by Congress a brigadier general in the Continental army, and thus held two commissions, since the State Convention refused to accept his resignation as brigadier general of militia. So great was Clinton’s popularity at this time that at the first election under the new state constitution he was chosen both Governor and Lieutenant Governor; he declined the latter office, and on 30 July 1777 entered upon his duties as governor — and continued his duties as brigadier general. In 1780 he took the field and checked the advance of Sir John Johnson and the Indians in the Mohawk Valley.

In his administration Clinton was energetic and patriotic, and though not possessing the intellectual attainments of some of his New York contemporaries, he was more popular than any of them, as is attested by his service as governor for eighteen successive years (1777 – 95), member of the Assembly for two years (1800 – 01), and Governor again for a final triennial term in 1801. In the elections of 1780, 1783 and 1786 he had no opponent. In the struggle in New York over the adoption of the Federal Constitution he was one of the leaders of the opposition, but in the State Convention of 1788, over which he presided, his party was defeated and the Constitution was ratified.

In national politics he was a follower of Thomas Jefferson, and in state politics he led the faction known as Clintonians, which for a long time was the dominant faction in New York politics. In 1789, 1792 and 1796 Clinton received a number of votes in the Electoral College, but not a sufficient number to secure him the vice presidency (which was then awarded for the second highest number of votes). In 1804, however, after parties had been established and the method of voting was changed, he was nominated for the vice presidency by a Congressional caucus, and was duly elected to serve during Jefferson's second term.

In 1808 he sought nomination for the presidency, and was greatly disappointed when this went to James Madison. However, he was again chosen as vice president.

He died in Washington in 1812, before the expiration of his term, and was buried in the Congressional Cemetery. In 1908 his remains were transferred to Kingston, New York.