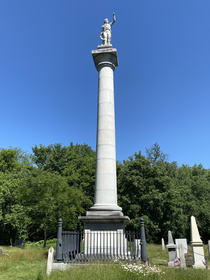 Ethan Allen, American soldier and frontiersman, was born at Litchfield, Connecticut, on the 10 January 1739. He removed, probably in 1769, to the New Hampshire Grants, where he took up lands. He eventually became a leader of those who refused to recognize the jurisdiction of New York and contended for the organization of the “Grants” into a separate province.

About 1771 he was placed at the head of the Green Mountain Boys, an irregular force organized for resistance to the Yorkers. Soon after the outbreak of the American Revolution, in command of a force raised by some members of the Connecticut Assembly to raise for the purpose, he captured Fort Ticonderoga from its British garrison on 10 May 1775. According to the unverified account of Allen himself, he called upon its commanding officer to surrender in the name of the great Jehovah and the Continental Congress.

When Seth Warner was elected colonel of the Green Mountain Boys in July 1775, Allen, piqued, joined General Philip Schuyler. Later, with a small command and without rank, he accompanied General Richard Montgomery’s expedition to Canada. On 25 September 1775 he was captured by the British near Montreal, and remained a prisoner at Falmouth, England; at Halifax, Nova Scotia; and in New York. Upon his exchange and release on 6 May 1778, he was brevetted colonel by the Continental Congress.

Allen then resumed his opposition to New York as Brigadier General of the militia of Vermont.

From 1779 to 1783 — acting with his brother, Ira Allen, and several others — he carried on indirect negotiations with Governor Frederick Haldimand of Canada, who hoped to win the Vermonters over to the British cause. He seems to have assured Haldimand’s agent that I shall do everything in my power to make this state a British province. In March 1781 he wrote to Congress, with characteristic bluster, I am as resolutely determined to defend the independence of Vermont as congress that of the United States, and rather than fail will retire with the hardy Green Mountain Boys into the desolate caverns of the mountains and wage war with human nature at large.

Ethan Allen was a frontier hero of boundless self-confidence, with shrewdness in thought and action equal to almost any emergency. In 1787 he moved to Burlington, Vermont — where he died on 11 February 1789.

We are not to expect to be translated from despotism to liberty in a feather bead.