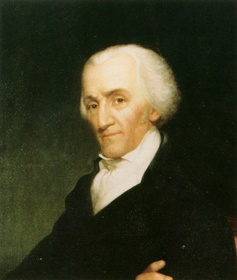 Elbridge Gerry, American statesman, was born in Marblehead, Massachusetts, in 1744, the son of Thomas Gerry (d. 1774), a native of Newton, England, who emigrated to America in 1730, and became a prosperous Marblehead merchant. The son graduated from Harvard in 1762 and entered his father’s business. In 1772 and 1773 he was a member of the Massachusetts General Court, in which he identified himself with Samuel Adams and the patriot party.

In 1773 he served on the Committee of Correspondence, which became one of the great instruments of intercolonial resistance. In 1774 – 75 he was a member of the Massachusetts Provincial Congress. The passage of a bill proposed by him (November 1775) to arm and equip ships to prey upon British commerce, and for the establishment of a prize court, was the first actual avowal of offensive hostility against the mother country which is to be found in the annals of the American Revolution.

From 1776 to 1781 Gerry was a member of the Continental Congress, where he early advocated independence, and was one of those who signed the Declaration of Independence after its formal signing on 2 August 1776, at which time he was absent. He was active in debates and committee work, and for some time held the chairmanship of the important Standing Committee for the Superintendence of the Treasury, in which capacity he exercised a pre-dominating influence on congressional expenditures. In February 1780 he withdrew from Congress because of its refusal to respond to his call for the yeas and nays. Subsequently he laid his protest before the Massachusetts General Court which voted its approval of his action.

On his return to Massachusetts, and while he was still a member of the Continental Congress, he was elected under the new state constitution (1780) to both branches of the state legislature, but accepted only his election to the House of Representatives. On the expiration of his congressional term, he was again chosen a delegate by the Massachusetts legislature, but it was not until 1783 that he resumed his seat. During the second period of his service in Congress, until 1785, he was a member of the committee to consider the treaty of peace with Great Britain, and chairman of two committees appointed to select a permanent seat of government.

In 1784 he bitterly attacked the establishment of the Order of the Cincinnati on the ground that it was a dangerous menace to democratic institutions. In 1786 he served in the state House of Representatives.

Not favoring the creation of a strong national government he declined to attend the Annapolis Convention in 1786, but in the following year, when convening the Constitutional Convention was an assured fact (though he opposed the purpose for which it was called) he accepted an appointment as one of the Massachusetts delegates, with the idea that he might personally help to check too strong a tendency toward centralization. His exertions in the convention were ceaseless in opposition to what he believed to be the wholly undemocratic character of the instrument, and eventually he refused to sign the completed constitution. Returning to Massachusetts, he spoke and wrote in opposition to its ratification, and although not a member of the convention called to pass upon it, he laid before this convention, by request, his reasons for opposing it, among them being that the constitution contained no bill of rights, that the executive would unduly influence the legislative branch of the government, and that the judiciary would be oppressive.

Subsequently he served as an Anti-Federalist in the U.S. House of Representatives in 1789 – 1793, taking, as always, a prominent part in debates and other legislative concerns. In 1797 he was sent by President John Adams, together with John Marshall and Charles Cotesworth Pinckney, on a mission to France to obtain from the government of the Directory a treaty embodying a settlement of several long-standing disputes. The discourteous and under-handed treatment of this embassy by Talleyrand and his agents, who attempted to obtain their ends by bribery, threats and duplicity, resulted in the speedy retirement of Marshall and Pinckney. The episode is known in American history as the XYZ Affair. Gerry, although despairing of any good results, remained in Paris for some time in the vain hope that Talleyrand might offer to a known friend of France terms that had been refused to envoys whose anti-French views were more than suspected. This action of Gerry’s brought down upon him from Federalist partisans a storm of abuse and censure, from which he never wholly cleared himself.

In 1810 – 12 he was Governor of Massachusetts. His administration, which was marked by extreme partisanship, was especially notable for the enactment of a law by which the state was divided into new senatorial districts in such a manner as to consolidate the Federalist vote in a few districts, thus giving the Democratic-Republicans an undue advantage. The outline of one of these districts, which was thought to resemble a salamander, gave rise in 1812, through a popular application of the governor’s name, to the term Gerrymander.

In 1812, Gerry, who was an ardent advocate of the war with Great Britain, was elected on the ticket with James Madison, Vice President of the United States. He died in office at Washington in 1814.