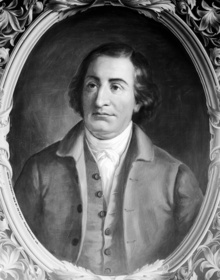 Edmund Jennings Randolph, American statesman, was born in 1753, at Tazewell Hall, Williamsburg, Virginia, the family seat of his grandfather, Sir John Randolph (1693 – 1737), and his father, John Randolph (1727 – 84), who — like his uncle Peyton Randolph — were king's attorneys for Virginia. Edmund graduated from the College of William and Mary, and studied law with his father, who, feeling bound by his oath to King George III, went to England in 1775.

From August to October 1775 Edmund was aide-de-camp to General Washington. In 1776 he became a member of the Virginia Convention, and was on its committee to draft a constitution. In the same year he became the first attorney general of the state, serving until 1786. He served in the Continental Congress in 1779 and again in 1780 – 82. Randolph had a large private practice, including much legal business for Washington. In 1786 he was a delegate to the Annapolis Convention, and in 1787 – 88 was Governor of Virginia.

Randolph was a delegate to the Constitutional Convention of 1787, and on 29 May he presented the Virginia Plan, drafted by James Madison. At the Convention Randolph advocated a strongly centralized government, the prohibition of the importation of slaves, and a plural executive — suggesting that there should be three executives from different parts of the country. He refused to sign the constitution (one of three, along with George Mason and Elbridge Gerry) because too much power over commerce was granted to a mere majority in Congress, and because no provision was made for a second convention to act after the present instrument had been referred to the states. In October 1787 he published an attack on the Constitution; yet in the Virginia convention he urged its ratification, arguing that it was too late to attempt to amend it without endangering the Union, and thinking that Virginia’s assent would be that of the necessary ninth state.

In 1788 he refused re-election as governor, and entered the House of Delegates to work on the revision and codification of the state laws (published in 1794). In September 1789 he was appointed by President Washington first Attorney General of the United States. He worked for a revision of Ellsworth's judiciary act of 1789, and especially to relieve justices of the Supreme Court of the duties of circuit judges, and advocated a Federal code; in 1791 he considered the scheme by Alexander Hamilton for a national bank unconstitutional; and in 1792 – 93, in the case Chisolm v. Georgia before the Supreme Court, argued that a state might be sued by a citizen of another state.

On 2 January 1794 he succeeded Thomas Jefferson as Secretary of State. In 1795 he wrote thirteen letters, signed Germanicus, defending the President in his attack on the American Jacobin or democratic societies. He was the only cabinet member who opposed the ratification of the Jay treaty, and before it was ratified, the delicate task of keeping up friendly diplomatic relations with France fell to him. Home dispatches of the French minister, Joseph Fauchet, intercepted by a British man-of-war and sent to the British minister to the United States, accused Randolph of asking for money from France to influence the administration against Great Britain. Although this charge was demonstrably false, Randolph when confronted with it immediately resigned. Subsequently he secured a retraction from Fauchet.

He published A Vindication of Mr. Randolph's Resignation (1795) and Political Truth, or Animadversions on the Past and Present State of Public Affairs (1796). He was held personally responsible for the loss of a large sum of money during his administration of the State Department, and after years of litigation was judged by an arbitrator to be indebted to the government for more than $49,000, which he paid at great sacrifice to himself. He re-moved to Richmond in 1803, and during his last years was a leader of the Virginia bar; in 1807 he was a counsel to Aaron Burr in his trial for treason.

The American Revolution, or the peculiar light of the age, seems to have opened the eyes of almost every nation in Europe, and a spirit of equal liberty appears fast to be gaining ground everywhere.