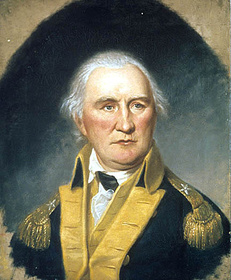 Daniel Morgan, American soldier in the militia, of Welsh ancestry, was born in Hunterdon County, New Jersey, in the winter of 1736. In 1753 he settled in Virginia.

In June 1775, soon after the outbreak of the Revolutionary War, he was commissioned a captain of Virginia riflemen, and he marched his company to Boston in 21 days. In the winter of 1775 he accompanied General Benedict Arnold to Canada, and in the assault on Quebec (31-Dec-1775) he and his riflemen penetrated the city, where he was hemmed in and was forced to surrender. He was discharged on parole on 7 August 1776. On 12 November he was commissioned colonel of the 11th Virginia and soon afterwards he was released from his parole.

In the summer of 1777 he was engaged in minor skirmishes in New Jersey, and early in September joined General Horatio Gates, then engaged in the campaign against General Burgoyne. At the first battle of Saratoga (19-Sep-1777) he was, until Arnold’s arrival late in the day, the ranking officer on the field; and in the second battle (7-Oct-1777) also took a prominent part. Morgan rejoined Washington in November near Philadelphia. In March 1779 he was commissioned by Congress colonel of the 7th Virginia; but in July, suffering from poor health and dissatisfied because Congress did not advance him further in rank, he resigned from the army and retired to Virginia.

After the Battle of Camden (16-Aug-1780), however, he joined Gates (then in command in the South) at Hillsborough, North Carolina, and on 1 October took command of a corps. On the 13th of the same month Congress tardily raised him to the rank of brigadier general. In January 1781 Cornwallis and Tarleton attempted to entrap him, but at Cowpens (17-Jan-1781) he defeated Tarleton and then escaped from Cornwallis into North Carolina.

In December 1793 he was commissioned major general of Virginia militia, and in November 1794 commanded troops sent to suppress the Whiskey Rebellion in western Pennsylvania. He was a Federalist representative in Congress in 1797 - 99. Daniel Morgan died in Winchester, Virginia, in 1802.

The right of altering the government was a natural right, and not a right of government.