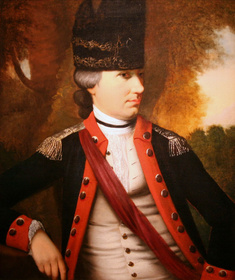 Charles Cotesworth Pinckney, American statesman, was born in Charleston, South Carolina, in 1746. The son of Charles Pinckney (d. 1758), by his remarkable second wife, Eliza Lucas (1722 - 93), who was responsible for expanding the production and export of Indigo in the colonies. Charles, like his younger brother Thomas after him, was sent to England at an early age for his education. Both were at Westminster and Oxford, were called to the bar, and for a time studied in France at the Royal Military College at Caen.

Returning to Charleston after an absence of 16 years, C.C. Pinckney began the practice of law and soon became deputy attorney general for several towns. He was elected to the first South Carolina provincial congress (1775) and was chosen president of the South Carolina senate (1779).

In late 1776 he became a colonel in the South Carolina militia. He took his regiment north, to join Washington’s Continental Army, and participated in the Battle of Brandywine (Sep-1777) and the Battle of Germantown (Oct-1777).

When the Revolutionary War moved south he became an active soldier once again. In 1779 he took part in the Georgia expedition and the Siege of Savannah, and, like his cousin Charles Pinckney, was captured at the fall of Charleston in 1780. Kept in close confinement, he was released in a prisoner exchange in 1782. At the end of the war he was commissioned a brevet brigadier general in the Continental Army (Nov-1783).

Pinckney was a prominent member of the Constitutional Convention of 1787, advocating the counting of all slaves as a basis of representation and opposing the abolition of the slave trade. He opposed as impracticable the election of representatives by popular vote, and also opposed the payment of senators, who, he thought, should be men of wealth. Subsequently he bore a prominent part in securing the ratification of the Constitution for his state in May 1788.

In 1790 he was also a prominent leader at the state convention that framed the South Carolina State Constitution.

Following the organization of the Federal government, President Washington offered to Pinckney successive appointments —Associate Justice of the Supreme Court (1791), Secretary of War (1795), Secretary of State (1795) — each of which he declined.

But in 1796 he allowed himself to succeed James Monroe as United States Minister to France. With relations between the U.S and France deteriorating, The Directory refused to receive him and he retired to Holland. When Elbridge Gerry and John Marshall were appointed to act with him the next year, they met at The Hague and then travelled to Paris where a large loan to France and a bribe to French Foreign Minister Talleyrand and members of the Directory was the price of admission. To which Pinckney is said to have replied No, no, not a sixpence.

The Commissioners accomplished nothing and their correspondence was sent to the U.S. Congress with the letters X, Y, and Z inserted in place of the names of the French agents who were involved. When the correspondence was published in 1778, the scandal of the XYZ Affair so outraged the American public that the United States nearly went to war with France. No, no, not a sixpence became Millions for defense, but not one cent for tribute!

Pinckney was a Federalist candidate for Vice President in 1800, running unsuccessfully with John Adams; in 1804 and 1808 he was the party’s unsuccessful candidate for President. From 1805 until his death in 1825 he was president-general of the Society of the Cincinnati.

But with the British army evacuated [from Philadelphia in 1778] and the Patriots now in charge, Philadelphia Loyalists were doubly vulnerable to censure and punishment for siding with the Crown and for having consorted with the enemy. The Philadelphia Assembly Appointed [Charles Willson] Peale and four others to be Commissioners of Forfeited Estates, and for that the commissioners would receive a 5 percent commission. Peale’s group had extraordinary power to interrogate suspected traitors, break into houses, remove property, and sell off estates. Writs were issued to seize 118 estates ...

— Paul Staiti
Of Arms and Artists: The American Revolution Through Painter’s Eyes (2016)

Every man’s own reason must be his oracle.