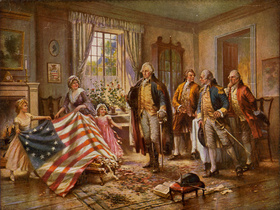 Just hours after the king opened the new Parliament [in 1775, British Prime Minister Lord] North’s wife wrote that the pressure on her husband was every day more disagreeable. Indeed it will be impossible for him to bear it much longer. Since hearing of Bunker Hill, he had doubted that Britain could conquer America by force of arms. But when he hinted at resigning, George replied in a note, You are my sheet anchor. The king would further add, It has not been my fate in general to be well served. By you I have, and therefore cannot forget it. Loyal North would hold fast and true, even as his countenance grew gloomier, his language more melancholy. He had neither devised the war nor liked it, Walpole wrote, but liked his place, whatever he pretended.

The tree of liberty must be refreshed from time to time with the blood of patriots and tyrants. It is its natural manure.