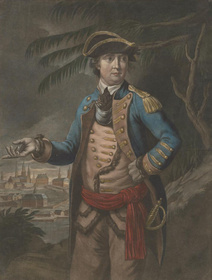 Benedict Arnold, Continental Army officer who defected to the British, was born in Norwich, Connecticut in 1741. He was the great-grandson of Benedict Arnold (1615 - 78), thrice colonial governor of Rhode Island between 1663 and 1678, and was the fourth in direct descent to bear the name. He received a fair education but was not studious, and his youth was marked by the same waywardness which characterized much of his career. At fifteen he ran away from home and took part in an expedition against the French (during the French and Indian War), but, restless under restraint, he afterwards deserted and returned home.

In 1762 Arnold settled in New Haven, where he became the proprietor of a drug and book shop, and where he successfully engaged in West Indies trade. Immediately following the Battle of Lexington and Concord (19-Apr-1775), Arnold led the local militia company — of which he was captain — along with other volunteers, to Cambridge, Massachusetts. There he proposed to the Massachusetts Committee of Safety the seizing of Fort Ticonderoga in New York, which he knew was poorly defended by the British. Four days later (3-May) his offer was accepted and he was commissioned a colonel in the Massachusetts militia.

Enlisting men necessary for the undertaking in the western part of Massachusetts and neighboring colonies, Allen wanted to lead the attack on Ticonderoga himself. He was forestalled, however, in Castleton, Vermont, by Ethan Allen), acting on behalf of some members of the Connecticut Assembly. Reluctantly waiving his own claim to command, Arnold served as a volunteer under Allen; the Americans captured Fort Ticonderoga on 10 May 1775. Soon afterwards, since Arnold (representing Massachusetts) had yielded to Connecticut, a committee was tasked to make an inquiry into his conduct. Angered, Arnold resigned and returned to Cambridge.

He next suggested an invasion of Canada, but, once decided by Continental Congress, Arnold was passed over to lead the campaign in favor of General Philip Schuyler, commander of the branch of the Continental Army. So Arnold traveled to Cambridge and recommended a second force to George Washington that would travel through the Maine wilderness to meet up with Schuyler’s troops outside of Quebec.

Starting with 1,100 men, Arnold left Cambridge on 17 September 1775. He reached Gardiner, Maine, on 10 October, advanced through the Maine woods, and after suffering privations, hardships, snow and cold, near starvation, the death of 200 men, and the defection of 300 who had turned back, his little force reached Quebec on 13 November. But the garrison commanded by British General Guy Carleton had been forewarned; the element of surprise was lost. Arnold was compelled to wait for the arrival of American Brigadier General Richard Montgomery —who had been placed in command of the invasion by an ailing Schuyler — from Montreal on 2 December. The combined attack on Quebec (31-Dec) failed. Montgomery and some 50 Americans were killed, over 400 were captured, and Arnold’s leg was shattered.

In January 1776 Arnold finally received a commission of brigadier general. He remained in Canada, became commander at Montreal in April, and began his retreat in June. Sometime thereafter, charges of misconduct and dishonesty — growing chiefly out of his seizure from merchants in Montreal of goods for the use of his troops — were brought against him. These charges were unhurriedly investigated by the Board of War, which in a report confirmed by the Continental Congress (23-May-1777), declared that his character and conduct had been cruelly and groundlessly aspersed. He was completely exonerated.

Arnold next instigated the first naval battle of the Revolutionary War on 11 October 1776. Having constructed a flotilla of ships and gunboats for use on Lake Champlain in New York, Arnold engaged a greatly superior British fleet near Valcour Island. After inflicting heavy damage on the enemy, the Americans escaped under cover of night. Two days later he was overtaken by the British fleet. With only one war-vessel, and that crippled, he delayed the British long enough to enable his other vessels to escape, fighting with desperate valor, and finally running his own ship aground and escaping to Crown Point.

Arnold’s brilliant exploits drew attention to him as one of the most promising of the Continental officers. It won him the friendship of Washington. Nevertheless, when in February 1777 Congress created five new major generals, Arnold, although the ranking brigadier was passed over since Connecticut already had two major-generals, and Congress, wanting sectional balance, promoted men who were his juniors. Angered, feeling slighted, Arnold threatened to leave the service. It was only at Washington’s urgent persuasion that he stayed.

In the Battle of Ridgefield (27-Apr-1777), Arnold led a small contingent of militia attempting to stop or slow the British return to the coast; they attacked with such vigor that the Regulars escaped to their ships with great difficulty. He was again wounded in his left leg, but his action in the battle, coupled with the death of Major General Wooster from wounds sustained in the action, finally resulted in Arnold's promotion to major general — but without seniority over those generals who had previously been promoted.

On 24 July 1777, Arnold arrived at Fort Edward, New York, to join General Schuyler in the Northern Department. In August, he proceeded up the Mohawk Valley with a force of 900 to relieve the siege at Fort Stanwix (Fort Schuyler) by British Colonel St. Leger.

Arnold next served under General Horatio Gates during the Battles of Saratoga in New York. He commanded the American left wing in the first battle of Saratoga at Freeman’s Farm (9-Sep-1777), but his ill-treatment at the hands of Gates, whose jealousy had been aroused, led to a quarrel that terminated in Arnold being relieved of command. He remained with the army, however, at the urgent request of his brother officers. Nominally without command, he served brilliantly at Bemis Heights in the second battle of Saratoga (7-Oct), during which he was seriously wounded in the left leg.

Ten days later (17-Oct) General John Burgoyne surrendered to the Americans, giving them their first decisive victory of the war.

Arnold bedridden for five months, was thanked by Congress for his services, and received a new commission giving him at last his proper relative rank. In June 1778, after the British relinquished Philadelphia, Washington appointed him military commander of the city. There he came into conflict with the state authorities, jealous of any outside control. And Arnold made himself conspicuous. He lived lavishly, entertained lavishly, and took for his second wife, Margaret (Peggy) Shippen, age 18 and 20 years younger than he, daughter of Edward Shippen, a moderate Loyalist (who later became Chief Justice of Pennsylvania; 1799 - 1805).

Early in February 1779 the executive council of Pennsylvania, presided over by Joseph Reed — one of Arnold’s most persistent enemies — presented Congress with eight charges of misconduct against Arnold, none of which was of any great importance. Arnold demanded an investigation, and in March a committee of Congress made a report exonerating him; but Reed obtained reconsideration, and in April 1779, Congress, though threw out four charges, but referred the other four to a court martial. Despite Arnold’s demand for a speedy trial, it was December before the court was convened. Arnold argued his own case. When the court rendered its verdict (26-Jan-1780), it practically acquitted him of all intentional wrong-doing, but (apparently in deference to the Pennsylvania authorities) it directed Washington to reprimand him for two trivial and very venial offences. Arnold, who had confidently expected absolute acquittal, was inflamed. Even Washington’s kindly reprimand, couched almost in words of praise, could not subdue his anger.

Defection to the British

It was probably during this period of waiting for trial that Arnold entered into a secret correspondence with Sir Henry Clinton. He conceived a plan to betray some important post to the British, so he sought and obtained from Washington (August 1780) command of West Point — the key to the Hudson River Valley. Arnold’s offers to the British now became explicit, and, in order to perfect the details of the plot, Clinton’s adjutant general, Major John André, met him near Stony Point on the night of the 21 September. On the 23rd, while returning by land with details of the plot, Andre was captured, and the officer to whom he was entrusted unsuspectingly sent information of his capture to Arnold, who then fled behind British lines.

With the plot foiled, Arnold received a commission of Brigadier General in the British army, but he received only £6,315 in compensation — for his property losses — plus a small annual pension. Now serving the British, he led an expedition into Virginia that captured Richmond (Dec-1780) and led an attack upon New London, Connecticut (Sep-1781).

In December 1781 he moved to London. Though he was consulted on American affairs by King George III and his ministry, he obtained no further active service. Disappointed at the failure of his plans and embittered by the neglect and scorn with which he was met in England, he went to St John, New Brunswick (1787 - 91), once more engaging in trade with West India. In 1791 he returned to London, and after war broked out between Great Britain and France, was active in outfitting privateers.

Gradually sinking into melancholia, worn down by depression, and suffering from dropsy, he died in London in 1801.