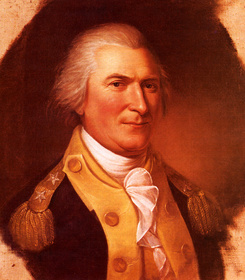 But what set [Baron von] Steuben apart from his contemporaries was his schooling under Frederick the Great, Prince Henry, and a dozen other general officers. He had learned from the best soldiers in the world how to gather and assess intelligence, how to read and exploit terrain, how to plan marches, camps, battles and entire campaigns. He gleaned more from his seventeen years in the Prussian military than most professional soldiers would in a lifetime. In the Seven Years’ War alone, he built up a record of professional education that none of his future comrades in the Continental Army — Horatio Gates, Charles Lee, the Baron Johann de Kalb, and Lafayette included — could match.

— Paul Lockhart
The Drillmaster of Valley Forge: The Baron de Steuben and the Making of the American Army (2008)

Taxation without representation is tyranny.