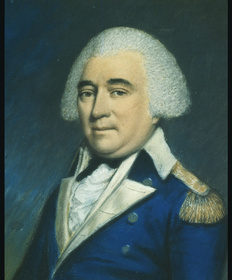 Anthony Wayne, American General, was born in the township of Easttown, Chester County, Pennsylvania, in 1745, of a Yorkshire family. As a boy he exhibited a marked bent toward a military life. He was educated in Philadelphia, and was a surveyor in Pennsylvania and then in 1765 in Nova Scotia, where he was an agent for a proposed colony. He married in 1766 and passed the next few years on the Chester county farm inherited from his father, held some minor offices, and after 1774 took an active part in various patriotic committees.

Having recruited and organized the Fourth Pennsylvania battalion of Continental troops, he first saw active service at its head in Canada during the retreat of Benedict Arnold after the Quebec campaign. His excellent behavior at the skirmish of Three Rivers led Philip Schuyler to place him for some months in command of Ticonderoga. While there, on 21 February 1777, he was commissioned brigadier general.

In April George Washington ordered him to take command of the Pennsylvania Line at Morristown, and he rendered distinguished service at Brandywine and Germantown, and by his coolness and courage at Monmouth, after the retreat of General Charles Lee, did much to save the day for the Continental Army. Later in 1778 political necessity led to his being superseded by General Arthur St. Clair, his ranking officer, in the command of the regular Pennsylvania troops, but upon Washington’s recommendation he organized a new Light Infantry corps, with which he performed the most daring exploit of the War of Independence — the recapture of Stony Point by a midnight attack (15 - 16 July 1779) at the point of the bayonet. This well-planned enterprise aroused the greatest enthusiasm throughout the country and won for Wayne the popular nick-name Mad Anthony.

Upon the disbanding of the Light Infantry corps, Wayne, again in command of the Pennsylvania line, rendered effective service in counteracting the treason of Benedict Arnold and of the mutiny of the Pennsylvania troops. In 1781 he was sent south to join General Nathanael Greene, but in Virginia was deflected to aid Lafayette against Lord Cornwallis. After the American success at Yorktown, Wayne served with such marked success in Georgia that the state rewarded him with a large rice plantation and Congress breveted him major general.

In 1792 Washington offered him the command of the regular army with the rank of major general to fight the hostile Indians northwest of the Ohio — who had grown confident by their successes over General Josiah Harmar in 1790 and General St. Clair in 1791 — and indirectly to compel the British to yield the posts they held on the American side of the lakes. Wayne spent the winter of 1792 – 93 recruiting his troops near Pittsburgh and in drilling them for effective service in the reorganized army. The government continued its efforts to induce the Indians to allow white settlements beyond the Ohio, but a mission in 1793 ended in failure.

Meanwhile Wayne had transferred his troops to Fort Washington (Cincinnati), and upon learning of the failure of the negotiations, advanced the greater part of his forces to Greenville, a post on a branch of the Great Miami, about 80 miles north of Cincinnati. During the winter he also established an outpost at the scene of St Clair’s defeat. The Indians attacked this post, Fort Recovery, in June 1794, but were repulsed with considerable slaughter. Late in July Wayne’s legion of regulars, numbering about 2,000, was reinforced by about 1,600 Kentucky militia under General Charles Scott, and the combined forces advanced to the junction of the Auglaize and Maumee rivers, where Fort Defiance was constructed. Here Wayne made a final effort to settle with the Indians, and upon being rebuffed, moved forward and encountered them on 10 August in the battle of Fallen Timbers, fought near the falls of the Maumee, and almost under the walls of the British post Fort Miami. This decisive Indian defeat, supplemented by the Treaty of Greenville, which he negotiated 3 August 1795, resulted in opening the Northwest to white settlers.

Wayne retained his position as commander of the army after its reorganization, and he rendered service in quelling the proposed filibustering expeditions from Kentucky against the Spanish dominions, and also took the lead in occupying the lake posts delivered up by the British. While engaged in this service he died at Erie, Pennsylvania, in 1796, and was interred there.

In 1809 his remains were removed to St David’s Churchyard, Radnor, Pennsylvania.

By 1789 many of the Federalists, particularly Hamilton, had no confidence whatsoever left in the virtue or the natural sociability of the American people as adhesive forces: to rely on such wild schemes and visionary principles, as radicals like Jefferson and Paine did, to tie the United States together, the Federalists said, was to rely on nothing. Hence Hamilton and the other Federalist leaders had to find things other than republican virtue and natural sociability to make the American people a single nation.

Tying people together, creating social cohesiveness, making a single nation out of disparate sections and communities without relying on idealistic republican adhesives — this was the preoccupation of the Federalists, and it explains much of what they did — from Washington’s proposals for building canals to Hamilton’s financial program.

Is it the Fourth?