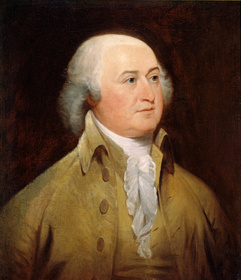 QUICK FACTS
BORN:
30 October 1735 in the north precinct of Braintree, Massachusetts (now Quincy)
DIED:
4 July 1826 at his home, Peacefield, in Quincy, Massachusetts
Buried at Quincy, in a crypt at United First Parish Church.
AUTHOR OF
PLACES TO VISIT
LINKS

He is vain, irritable and a bad calculator of the force and probable effect of the motives which govern men. This is all the ill which can possibly be said of him. He is as disinterested as the being which made him: he is profound in his views: and accurate in his judgment except where knowledge of the world is necessary to form a judgment. He is so amiable, that I pronounce you will love him if ever you become acquainted with him. He would be, as he was, a great man in Congress.

— Thomas Jefferson in a letter to James Madison, 1788.

It is difficult to recapture the intensity of excitement felt by Americans in 1776 over the prospect of forming new republican governments. It is a work, said Thomas Jefferson, of the most interesting nature and such as every individual would wish to have his voice in. Even the business of the Continental Congress was stifled because so many delegates — including Jefferson — left for home to take part in the paramount activity of erecting the new state governments. Constitutions, remarked Francis Lightfoot Lee, employ every pen. ... Nothing — not the creation of [the] confederacy, not the Continental Congress, not the war, not the French alliance — in the years surrounding the Declaration of Independence engaged the interests of Americans more that the framing of these governments.