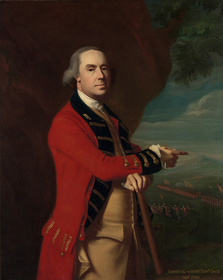 Thomas Gage, British general and colonial governor of Massachusetts, second son of the first Viscount Gage, was born in 1721. He entered the army in 1741 and saw service in Flanders and in the campaign of Culloden, becoming lieutenant colonel in the 44th foot in March 1751.

In 1754 he served in America, taking part the following year in General Braddock’s disastrous expedition against Fort Duquesne. In 1758 he became colonel of a new regiment, and served in General Amherst’s operations against Montreal. He was made Governor of Montreal, and promoted to major general in 1761. In 1763 he succeeded Amherst in the overall command of British forces in America and in 1770 became a lieutenant general.

In 1774 he was appointed Royal Governor of Massachusetts and in that capacity was entrusted with carrying into effect the Boston Port Act. The difficulties which surrounded him in the execution of his office at this time of the gravest unrest culminated in 1775, and in the action of 19 April at Lexington he initiated the American Revolutionary War. Following the Battle of Bunker Hill, Gage was succeeded by General Sir William Howe and returned to England.

The failure of the Loyalists to flock to the royal standard cannot be understood without appreciating how effectively they had been locked down and neutralized by the patriots. Loyalists could not buy, sell, or bequeath property or other assets. They were barred from all legal recourse to recover debts or redress any other injury. They could not practice law or teach unless they had taken an oath of allegiance to the cause. They could not be executors of estates or be a guardian to a child. Any person who wrote, or spoke, or by any act libeled or defamed Congress ... should be brought to trial.

Laws too gentle are seldom obeyed; too severe, seldom executed.