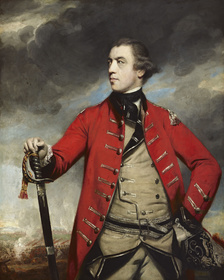 John Burgoyne — British general, politician, and dramatist — was born in 1722. He entered the army at an early age and was soon given the nickname Gentleman Johnny for his stylish uniforms and extravagant spending. In 1743 he made a runaway marriage with a daughter of the Earl of Derby, but soon had to sell his commission to meet his debts — after which he lived abroad for seven years. Through Lord Derby’s influence Burgoyne was reinstated at the outbreak of the Seven Years’ War (1754—63; known in the U.S. as the French and Indian War).

In 1758 he became captain and lieutenant colonel in the foot guards. In 1758—59 he participated in expeditions made against the French coast; in the latter year he was instrumental in introducing light cavalry into the British army. The two regiments then formed were commanded by George Eliott (afterwards 1st Baron Heathfield) and Burgoyne.

A Member of Parliament from 1761 to 1792, Burgoyne first sat in the House of Commons for Midhurst. In the following year he served as brigadier-general in Portugal, winning distinction by his capture of Valencia d’Alcantara and of Villa Velha. In 1768 he became a Member of Parliament for Preston, and for the next few years he occupied himself chiefly with his parliamentary duties, in which he was remarkable for his general outspokenness. At the same time, in addition to gambling recklessly, he devoted much attention to art and drama (his first play, The Maid of the Oaks, was produced by David Garrick in 1775).

In the army Burgoyne had by this time become a major general, and at the outbreak of the American Revolution he was appointed to a command. In 1777 he was at the head of the British reinforcements designed to invade the colonies from Canada. In this disastrous expedition he gained possession of Ticonderoga (for which he was made a lieutenant-general) and Fort Edward. Pushing on, however, he became detached from his communications with Canada, and was hemmed in by a superior force headed by American General Horatio Gates at Saratoga. On 17 October, some 3,500 troops laid down their arms.

Burgoyne’s failure became the colonists’ greatest success yet gained, and it proved the turning-point in the war.

The indignation in England against Burgoyne was great, but perhaps unjust. He returned to England at once to defend his conduct and demanded, but never obtained, a trial. He was deprived of his regiment and a governorship. However, when his political friends came into office in 1782, he was restored to his rank, given a colonelcy, and made commander-in-chief in Ireland and a privy councilor.

After the fall of the Marquess of Rockingham’s government a few months later, Burgoyne withdrew more and more into private life. In his later years he was principally occupied in literary and dramatic work. His comedy The Heiress (1786) ran through ten editions within a year and was translated into several foreign languages.

Though Burgoyne did not have children with his wife (who had died in June 1776 during his absence in Canada), he was survived by several natural children from Susan Caulfield, an opera singer — one of whom became Field Marshal Sir John Fox Burgoyne, who fought the Americans in the War of 1812.

By modern standards there is something unlikeable about John Hancock. His type of patriotism and charity is as obsolete as his brocaded dressing-gowns and jewelled buttons. He was one of those men who curiously go in and out of style. Once they are out they are hard to value. ‘The golden showers of guineas’ that marked his almost royal progress, his big speeches, like ‘burn Boston and make John Hancock a beggar if the public good requires it,’ do not arouse in us the same genuine enthusiasm they did in his contemporaries. Such men as Paul Revere, [Royal Governor Thomas] Hutchinson, Joseph Warren, or Sam Adams never are in style or out. Their personalities exist quite independently from the accident of their birth in the first half of the eighteenth century. This is not quite true of John Hancock.