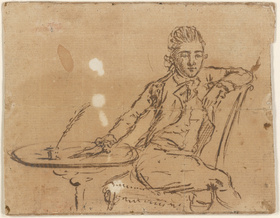 Self-portrait by Major André
on the eve of his execution

John André, British soldier involved in the Benedict Arnold defection, was born in London in 1751 to a wealthy family. His father was from Geneva; his mother was French. Accident brought him in 1769 to Lichfield, where, in the house of the Rev. Thomas Seward — whose daughter Anna was the center of a literary circle — he met the beautiful Miss Honora Sneyd. A strong attachment sprang up between the two, but their marriage was disapproved of by her family; André was sent to cool his love in his father's counting house in London, followed by a business tour to the continent.

Rapid Rise in the Military

Commerce was, however, too tame an occupation for his ambitious spirit and he joined the British Army to improve his station in life and find glory. In March 1771 he obtained a commission in the Royal Fusiliers (Seventh Regiment of Foot), which, after travel in Germany, he joined in Canada in 1774. Here his character, conduct, and accomplishments gained him rapid promotion.

Meanwhile André remained faithful to his love for Honora Sneyd — who in 1773 married R.L. Edgeworth. In a letter to Anna Seward, written shortly after being taken prisoner by the Americans at Siege of St. Jean in Quebec (3-Nov-1775), he states that he has been stripped of everything except the picture of Honora, which I concealed in my mouth. Preserving this I yet think myself fortunate.

After a prisoner exchange towards the close of 1776, André enjoyed a rapid rise due to patronage by elite officers. In succession he became aide-de-camp to General Charles Grey and then to Sir Henry Clinton, the commander-in-chief of the British forces. In New York, he was favored by General William Howe and his brother Admiral Richard Howe, who enjoyed the entertainments he produced at the John Street Theater. In 1778 Clinton promoted him to the rank of major and appointed him adjutant-general of the forces; in 1779 he was put in charge of British Secret Intelligence.

Early in 1780 the American general, Benedict Arnold, thinking himself injuriously treated by his colleagues, made overtures to the British to betray to them the important Fort at West Point on the Hudson River, a key of the American position, of which he was commandant. This seemed to Sir Henry Clinton a favorable opportunity for concluding the war; Major André was appointed to negotiate with Arnold.

For this purpose, he landed from a vessel bearing a flag of truce and had an interview with Arnold, who delivered to him full particulars and plans of West Point, and arranged with him to cooperate with the British during an attack which was to be made in a few days. Unfortunately for André, the British vessel was fired on before the negotiations were finished and obliged to drop down the river. André, therefore, could not return by the way he came and was compelled to pass the night within the American lines. After making the fatal mistake of exchanging his uniform for a civilian disguise, he set out next day by land for New York, provided by Arnold with a passport, and succeeded in passing the regular American outposts undetected.

Next day, however, just when all danger seemed to be over, André was stopped by three American militiamen. He gave to them such contradictory answers that, in spite of Arnold’s pass, they searched him and discovered in his boots the fatal proofs of his negotiations for the betrayal of West Point. Not-withstanding his offer of a large sum for his release, his captors delivered him up to the nearest American officer. General Washington, although admitting that André was more unfortunate than criminal, sent him before a court-martial, by which, notwithstanding a spirited defense, he was, in consequence of his own admissions, condemned to death as a spy.

In spite of the protests and entreaties of Sir Henry Clinton and the threats of Arnold he was hanged at Tappan on 2 October 1780 (age 30), while Arnold, warned by the unfortunate André, escaped by flight the punishment he so richly merited.

The justice of Andrés execution has been a fruitful theme for discussion, but both British and American military writers are agreed that he undoubtedly acted in the character of a spy, although under orders and entirely contrary to his own feelings. George Washington’s apparent harshness in refusing the condemned man a soldier’s death by shooting has also been censured, but it is evident that no other course was open to the American commander, since a mitigation of the sentence would have implied a doubt as to its justice.

Besides courage and distinguished military talents, Major André was a talented poet, artist, and musician. He was a great favorite in colonial society; during the winter he was social director to the army. He directed and painted background scenes for plays produced by acting members of the English Army. In Philadelphia he planned the outrageously extravagant Mischianza for General Howe when was asked to return to England in 1778.

His fate excited universal sympathy both in America and Europe, and the whole British army went into mourning for him. A mural sculptured monument to his memory was erected in Westminster Abbey by the British government when his remains were brought over and interred there in 1821. A memorial has also been erected to him by Americans on the spot where he was taken.