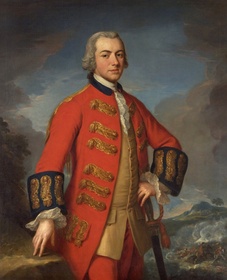 Henry Clinton, born in 1738, was the son of Admiral George Clinton — Governor of Newfoundland and subsequently of New York — and grandson of the 6th Earl of Lincoln. He is best remembered as a British general during the American Revolution.

After serving in the New York militia, he came to England and joined the Coldstream Guards. In 1758 he became captain and lieutenant colonel in the Grenadier Guards, and in 1760 – 62 distinguished himself as an aide-de-camp to Ferdinand of Brunswick in the Seven Years’ War. He was promoted colonel in 1762, and after the peace received the colonelcy of a regiment of foot, becoming major general in 1772. From 1772 to 1784, thanks to the influence of his cousin, the 2nd Duke of Newcastle, he had a seat in Parliament, first for Boroughbridge and subsequently for Newark, though for the greater part of this time he was on active service in the American colonies.

He took part in the Battles of Bunker Hill and Long Island, subsequently taking possession of New York. For his share in the Battle of Long Island he was made a lieutenant general and knighted. After Saratoga he succeeded General Sir William Howe as commander-in-chief in North America. He at once concentrated the British forces at New York, pursuing a policy of foraying expeditions in place of regular campaigns.

In 1779 he invaded South Carolina, and in 1780 in conjunction with Admiral M. Arbuthnot won an important success in the capture of Charleston. Friction, however, was constant between him and Lord Cornwallis, his second in command, and in 1782, after the capitulation of Cornwallis at Yorktown, he was superseded by Sir Guy Carleton.

Returning to England, he published in 1783 his Narrative of the Campaign of 1781 in North America, which provoked an acrimonious reply from Lord Cornwallis. He was elected a Member of Parliament for Launceston in 1790, and in 1794 was made Governor of Gibraltar, where he died in 1795.

Loyalism was a siren call for the British. They were constantly bending their strategy to conform to the chimera of Loyalist support that was assumed to be there but somehow never materialized. Howe’s Philadelphia campaign and Burgoyne’s invasion from Canada, as well as the British strategy in the South, were based on the assumption that large numbers of Loyalists would rise in support, if only sufficiently encouraged and protected ...