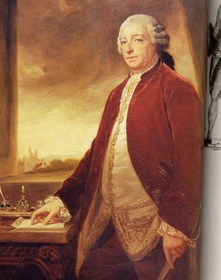 George Germain, 1st Viscount Sackville, was a British soldier, politician, and Secretary of State for the American Colonies during the Revolutionary War. The third son of Lionel Cranfield Sackville, 1st Duke of Dorset, he was born in 1716.

Educated at Westminster School and Trinity College, Dublin, he was became captain in the 7th Cathcart’s Horse in 1737. Three years later was transferred to Bragg’s regiment of foot (Gloucestershire Regiment) as a lieutenant colonel. Immediately afterwards the regiment sailed for active service on the Rhine, and although his regiment was not present at the Battle of Dettingen, Lord Sackville was made brevet colonel and aide-de-camp to King George II.

It was not until 1745 that he took part in his first battle, Fontenoy. Wounded in the charge of Cumberland's infantry column and captured, he was taken to the tent of King Louis XV to have his wound dressed. When released, he was sent home to serve against the Pretender in Scotland. He was appointed Colonel of the 20th Foot Regiment (Lancashire Fusiliers), but was too late to take part in the Battle of Culloden.

From 1747 to 1748 he was again with the Duke of Cumberland in the Low Countries, and in 1749 was transferred to the cavalry, receiving the colonelcy of the 7th (3rd) Irish Horse (Carabineers). With this office he combined those of first secretary to his father, the Lord Lieutenant of Ireland, and Irish Secretary of War, and a seat in each of the two Houses of Commons at Westminster and Dublin, winning at the same time the repute of being the gayest man in Ireland except his father. In 1755 he was promoted to major general, took an English command, and vacated his Irish offices. In 1757 he was made lieutenant general of the ordnance, and transferred to a fourth colonelcy.

In 1758, under the Duke of Marlborough, he shared in the ineffective raid on Cancale Bay, and the troops, after a short sojourn in the Isle of Wight, were sent to join the allied army of Duke Ferdinand of Brunswick in Germany. Marlborough died shortly after they landed; and Sackville succeeded him as commander-in-chief of the British contingent. But no sooner had he taken over the command than his haughty and domineering temper estranged him from both his second-in-command, Lord Granby, and the commander-in-chief, Prince Ferdinand.

This culminated at the Battle of Minden on 1 August 1759. The British infantry, aided by some of the Hanoverians, had won a brilliant success, and every man in the army looked to the British cavalry to charge and to make it a decisive victory. But Sackville, in spite of repeated orders from Prince Ferdinand, sullenly refused to allow Granby’s squadrons to advance. The crisis passed, and the victory remained an indecisive success. Popular indignation was unbounded; Sackville was dismissed from his offices. But his courage, though impugned, was sufficient to make him press for a court martial.

Sackville finally got his wish in 1760. A court assembled and he was found guilty of disobedience. He was judged unfit to serve his Majesty in any military capacity whatsoever. The sentence was executed with gratuitous harshness. It was read out on parade to every regiment in the service, with a homily attached, and placed on record in every regimental order book. Further, it was announced in the Gazette that his Majesty had expunged Sackville's name from the roll of the Privy Council.

Sackville doggedly sought his rehabilitation. During the Seven Year’s War (1756 - 63), Britain had gained an empire in the American colonies, while in Europe the fighting had largely resulted in a stalemate. With no British reverses to keep alive the memory of his dereliction of duty, King George III quietly restored his name to the roll of the Privy Council in 1763.

Hitherto without party ties in Parliament, Hamilton formally allied himself with Lord North in 1769. To this period belong the famous Junius Letters, with the authorship of which Sackville was erroneously credited. In 1770, under the terms of a will, he assumed the name of Germain. In the same year his coolness and courage in a duel with Captain George Johnstone, M.P., assisted to rehabilitate him. Then in 1775, he was named Secretary of State for the American Colonies in Lord North’s cabinet.

Thus, just as the American Revolutionary War was underway — and still standing condemned as unfit for any military employment — he exercised a powerful and unfortunate influence on the military affairs of the Great Britain. In those days, some of the business of the war department fell to the colonial office, and Germain was practically the director of the war. Whatever hopes of success there were in such a struggle, Germain and the North cabinet dissipated it by their misunderstanding of the situation as well as their friction with the military leadership fighting the war in North America.

But this failure was not on the same footing as that of Minden. As the virulent party attacks increased, the King persuaded Germain to step down in exchange for a peerage. In characteristic fashion, Germain stipulated for a viscounty, as otherwise he would be junior to his secretary, his lawyer, and to Jeffrey Amherst, who had been page to his father. So he was made Baron Bolebrooke, in the County of Sussex, and Viscount Sackville, of Drayton in the County of Northampton, in February 1781.

The North government collapsed later in the same month.

There was some opposition to the Viscount Sackville taking a seat in the House of Lords. But his health was failing and he withdrew from politics and spent his last years as a benevolent and autocratic country magnate. He died at Stoneland Lodge, his estate in Sussex, in 1785.

Sell a country! Why not sell the air, the clouds and the great sea, as well as the earth? Did not the Great Spirit make them all for the use of his children?