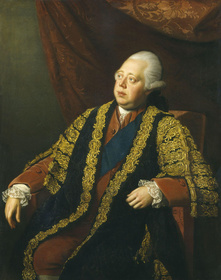 Frederick North, 2nd Earl of Guilford, but better known by his courtesy title of Lord North, was Prime Minister of England during the important years of the American Revolution. Born in 1732, he was educated at Eton and Christ Church, Oxford, and then sent to make a grand tour of the continent. On his return, though only 22, he was at once elected a Member of Parliament for Banbury, where his father was high steward. He sat in Parliament for the same town for nearly 40 years.

In 1759 he was chosen by the Duke of Newcastle to be a Lord of the Treasury and continued in the same office under Lord Bute and George Grenville until 1765. He had shown himself such a ready debater, that on the fall of the first Rockingham ministry in 1766, he was sworn of the Privy Council and made Paymaster-General by the Duke of Grafton. His reputation for ability grew so high that in December 1767, on the death of Charles Townshend, he was made Chancellor of the Exchequer.

With a temper that was never ruffled and a perpetual quiet humor, his popularity with both the House of Commons and the people continued to increase. When the retirement of the Duke of Grafton was necessitated by the hatred he inspired and by the attacks of the pseudonymous writer Junius, no better successor could be found than the Chancellor of the Exchequer. Lord North succeeded the Duke in March 1770 and continued in office for 12 of the most eventful years in English history.

He became Prime Minister to a king who was determined to govern as well as rule. George III had at last overthrown the ascendancy of the great Whig families, under which he had so long groaned, and he realized that he could only govern by obtaining a majority in Parliament to carry out his wishes. This had been attained by a great expenditure of money in buying seats and by a careful exercise of his patronage. However, in addition to a majority, he needed a minister who would act as his lieutenant. Such a minister he found in Lord North. How a man of undoubted ability could have allowed himself to be thus used as a mere instrument cannot be explained. But the confidential tone of the King’s letters seems to show that there was an unusual intimacy between them — which may account for North’s compliance.

The path of the Prime Minister in Parliament was a hard one. North had co-defend measures which he had not designed, and of which he had not approved — and this in a House of Commons in which all the oratorical ability of Edmund Burke and Charles James Fox was against him.

The most important events of his ministry were those of the American Revolutionary War. Though North cannot be accused of causing it, one of his first acts was the retention of the tea duty; and it was he who introduced the Boston Port Bill in 1774. When war broke out he counselled peace, and it was only the earnest solicitations of the King that he not to leave his sovereign again to the mercy of the Whigs that induced him to defend a war which, from 1779, he knew to be both hopeless and impolitic. At last, in March 1782, he insisted on resigning after news reached him of the surrender of Lord Cornwallis at the Battle of Yorktown (1781).

No man left office more blithely. North had been well rewarded for his assistance to the King. His children had good sinecures; his half-brother was Bishop of Winchester. He himself became Chancellor of the University of Oxford, Lord Lieutenant of the county of Somerset, and, finally, a Knight of the Garter.

And he did not remain out of office for long. In April 1783 he formed a coalition with his old opponent C.J. Fox; he became Secretary of State with him under the nominal premiership of the Duke of Portland. He probably formed this coalition with Fox in order to show that he could act independently of the King and not merely be a royal mouthpiece. The coalition ministry went out of office on Fox’s India Bill in December 1783. North, who was losing his sight, finally gave up political ambition — though he played a somewhat important part in the debates on the Regency Bill in 1789.

He left his seat in Parliament in 1790. In the same year he succeeded his father as Earl of Guilford. He did not long survive his elevation, for he died peacefully in 1792.

It is impossible to consider Lord North a great statesman. However, he was a good-tempered and humorous member of the House of Commons. In a time of unexampled party feeling he won the esteem of his most bitter opponents. Burke, in his Letter to a Noble Lord (1796), sums up his character like this:

He was a man of admirable parts; of general knowledge; of a versatile understanding fitted for every sort of business; of infinite wit and pleasantry; of a delightful temper; and with a mind most perfectly disinterested. But it would be only to degrade myself by a weak adulation, and not to honour the memory of a great man, to deny that he wanted something of the vigilance and spirit of command that the time required.

A mind always employed is always happy. This is the true secret, the grand recipe, for felicity. The idle are the only wretched.