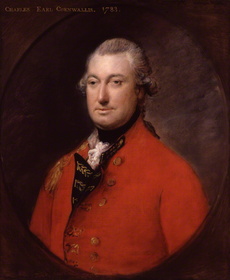 Charles Cornwallis, 1st Marquess, eldest son of Charles, 1st Earl of Cornwallis (1700-1762), was born in 1738. Educated at Eton and Clare College, Cambridge, he entered the army. For some time he was member of parliament for Eye; in 1761 he served a campaign in Germany, and was appointed to a lieutenant-colonelcy in the 12th Foot. In 1762 he succeeded to the earldom and estates of his father; in 1765 he was made aide-de-camp to King George III and gentleman of the bedchamber; in 1766 he obtained a colonelcy in the 33rd Foot; and in 1770 he was appointed Governor of the Tower.

In public life he was distinguished by independence of character and inflexible integrity. He voted without regard to party, and opposed the ministerial action against the American colonies. But when the American Revolution broke out, he accompanied his regiment across the Atlantic, and served not without success as major general. In 1780 he was appointed to command the British forces in South Carolina, and in the same year he routed General Horatio Gates at Camden. In 1781 he defeated Major General Nathanael Greene at Guilford Court House, and made a destructive raid into Virginia. He was besieged by the American and French armies in the Battle of Yorktown, and was forced to surrender on 19 October 1781.

With him fell the English cause.

Cornwallis not only escaped censure, however, but in 1786 was distinguished by receiving a vacant (Order of the) Garter, and was appointed Governor General of India and Commander-in-Chief in Bengal. As an administrator he projected many reforms, but he was interrupted in his work by the quarrel with Tippoo Sahib. In 1791 he assumed in person the conduct of the war and captured Bangalore; and in 1792 he laid siege to Seringapatam, and concluded a treaty with Tippoo Sahib, which stripped the latter of half his realm, and placed his two sons as hostages in the hands of the English.

He returned to England in 1793, received a marquessate and a seat in the privy council, and was made master general of the ordnance with a place in the Cabinet. In June 1798 he was appointed to the vice royalty of Ireland, and the zeal with which he strove to pacify the country gained him the respect and goodwill of both Roman Catholics and Northern Protestants. On 17 July a general amnesty was proclaimed, and a few weeks afterwards the French army under Humbert was surrounded and forced to surrender. In 1801 Cornwallis was replaced by Lord Hardwicke, and soon after he was appointed plenipotentiary to negotiate the treaty of Amiens (1802). In 1805 he was again sent to India as governor general, to replace Lord Wellesley, whose policy was too advanced for the directors of the East India Company.

Cornwallis was in ill-health when he arrived at Calcutta, and while hastening up the country to assume command of the troops, he died at Ghazipur, in the district of Benares, in 1805.

All men having power ought to be distrusted to a certain degree.