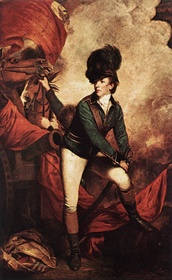 Sir Banastre Tarleton, English soldier, was the son of John Tarleton (1719 - 73), a Liverpool merchant, and was born in Liverpool in 1754. Educated at Oxford, he entered the army and in December 1775 sailed as a volunteer to America with Earl (Charles) Cornwallis. His services during the American War of Independence in the year 1776 gained for him the position of a brigade major of cavalry.

He was present at the Battle of Brandywine and at other engagements in 1777 and 1778, and as the commander of the British legion, a mixed force of cavalry and light infantry, he proceeded at the beginning of 1780 to South Carolina, rendering valuable services to General Sir Henry Clinton in the operations which culminated in the capture of Charleston. He was responsible for a British victory at Waxhaw in May 1780, and he materially helped Cornwallis to win the Battle of Camden in the succeeding August.

He was completely victorious in an engagement with Thomas Sumter at Fishing Creek, or Catawba Fords, but was not equally successful when he encountered the same general at Blackstock Hill in November 1780; then in January 1781, in spite of much personal valor, he was defeated with heavy losses by Americans at Cowpens, led by Brigadier General Daniel Morgan.

Having been successful in a skirmish at Tarrants House, and having taken part in the Battle of Guilford in March 1781, he marched with Cornwallis into Virginia, and after affording much assistance to his commander-in-chief he was instructed to hold Gloucester. This post, however, was surrendered to the Americans with Yorktown in October 1781.

Tarleton returned to England on parole. In 1790 he entered parliament as member for Liverpool, and with the exception of a single year he remained in the House of Commons until 1812. In 1794 he became a major general; in 1812 a general; and he held a military command in Ireland and another in England. In 1815 he was made a baronet.

For some time Tarleton lived with the actress Mary Robinson (Perdita), and his portrait was painted both by Reynolds and by Gainsborough. He died without children at Leintwardine in Shropshire in 1833.

A bill of rights is what the people are entitled to against every government on earth, general or particular, & what no just government should refuse or rest on inferences.