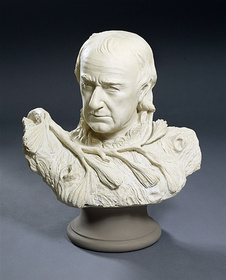 William Rush, American sculptor, was born in Philadelphia in 1756. His father was a ship carpenter and, while a teenager, William became apprenticed to a woodcarver named Edward Cutbush. Within three years his skills soon surpassed those of his master, and he had steady work carving figureheads for ships.

Sometime near 1774, Rush opened his own shipcarving business. In 1777 he joined the Philadelphia militia to participate in the Revolutionary War. He married Martha Simpson Wallace in 1780, and one of their ten children, John Rush, also became a shipcarver.

When the U.S. Navy was created in 1794, it chose Rush to create the figureheads, which he did for four of the six original frigates. He also designed the figurehead for the fifth frigate, the USS Constitution (and possibly designed the sixth, for the USS President, as well).

It was his craftsmanship with figureheads as well as the Embargo Act of 1807 that allowed Rush to branch out and take on commissions for sculpture. His first important works were the figures of Comedy and Tragedy (1808) for the Chestnut Street Theater in Philadelphia. In 1809 he completed his famous fountain sculpture, Water Nymph and Bittern, commissioned by the Center Square Waterworks. Designed by Benjamin Latrobe — the architect for the United States Capitol — it stood where Philadelphia City Hall stands now.

In 1815 Rush carved an ambitious full-length figure of George Washington. Like all his wooden sculptures, he painted it white to simulate marble. In 1824, when Marquis de Lafayette returned to the United States for the first time since the American Revolution, Rush not only carved his portrait but also executed two monumental sculptures, Wisdom and Justice, which were placed atop a triumphal arch, in front of Independence Hall, that was erected in Lafayette’s honor.

He created busts of a number of prominent Americans, notably Philadelphia doctor Benjamin Rush (1812) and George Washington (c. 1817), as well as an earlier figurehead of Benjamin Franklin (1787). He also executed a very fine terra cotta Self-Portrait (1822), where the artist emerges from a pine tree knot.

William Rush was also a teacher. In 1801 the Society of Artists in Philadelphia elected Rush its first president and, in 1811, appointed him professor of sculpture. That year he began exhibiting sculpture at the Pennsylvania Academy of Fine Arts (which he, Charles Willson Peale, and others had founded in 1805), and in 1813 he supervised the Academy’s first class using live models.

Most of the figureheads by Rush do not survive, so his legacy is in his plaster, terra cotta, and surviving wood carvings. In an age of neoclassicism in the arts, he was closer to the decorative rococo tradition of the 18th century. And while he was certainly the first significant American sculptor, his work can also be seen as the culmination of the artisan tradition of woodcarving.

Loyalism was a siren call for the British. They were constantly bending their strategy to conform to the chimera of Loyalist support that was assumed to be there but somehow never materialized. Howe’s Philadelphia campaign and Burgoyne’s invasion from Canada, as well as the British strategy in the South, were based on the assumption that large numbers of Loyalists would rise in support, if only sufficiently encouraged and protected ...