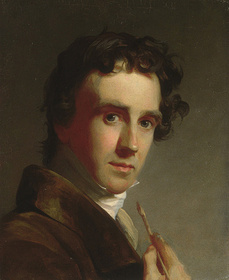 Thomas Sully, American portrait painter, was born in England at Horncastle, Lincolnshire in 1783. His parents were both actors and he was the fourth of nine children — the youngest son. In 1792 when Sully was nine, the family immigrated to the United States and settled in Charleston, South Carolina.

He was apprenticed to his brother-in-law, a French emigrée miniaturist, Jean Belzons, and in 1999 he joined his older brother Lawrence, a miniature and device painter, in Richmond, Virginia. After Lawrence’s premature death, Sully married his sister-in-law (Sarah Annis Sully), and in 1805 and they moved to New York City. For a time they also stayed in Hartford, Connecticut and Boston (where he was a pupil of Gilbert Stuart), before they permanently settled in Philadelphia in 1808.

Sully entered into an agreement with a group of prominent citizens in 1809 that enabled him to embark upon a year-long trip to study art in London. He was a student at the studio of Benjamin West and he studied with Henry Fuseli.

He returned to the United States in 1810. Following the deaths of Gilbert Stuart (d. 1826) and Charles Willson Peale (d. 1827), he became the leading American portrait painter.

Sully again visited London in 1837 — this time with a commission from the St George’s Society of Philadelphia to paint a full-length portrait of Queen Victoria. Following his return, he produced an average of 35 to 40 portraits a year for the remainder of his life.

Like other artists of his day, Thomas Sully probably aspired to paint a greater number of historical paintings but realized that portrait commissions would support his family. His most dramatic painting, in the historical style of John Trumbull, was The Passage of the Delaware (1819) — completed 32 years before Emanuel Leutze’s much more famous Washington Crossing the Delaware (1851).

Sully died in Philadelphia in 1872.

An industrious painter who worked rapidly, Sully left about 2,000 portraits, a number of miniatures, and more than 500 subject and historical pictures. His paintings are elegant and romantically warm, emphasizing an economy of form and of color, though his later work suffers from a sentimentality that was popular in the mid-19th century.

The American Revolution, or the peculiar light of the age, seems to have opened the eyes of almost every nation in Europe, and a spirit of equal liberty appears fast to be gaining ground everywhere.