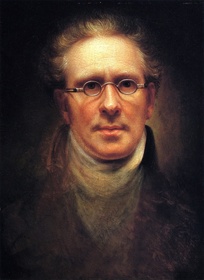 Rembrandt Peale, American painter, scion of artists, and son of Charles Willson Peale, was born in Bucks county, Pennsylvania in 1778. He studied under his father, under Benjamin West in London (1802 - 03), and for two years in Paris (1807 - 09).

As early as 1795 he had begun an artistic career with a life portrait of Washington. From this portrait he created a number of copies; he also used it as the starting point for his famous Patriae Pater, purchased by the United States government in 1832, and now in the Senate of the U.S. Capitol.

Peale succeeded John Trumbull as president of the American Academy of Fine Arts (founded in 1802 as the New York Academy of Fine Arts), and he was one of the original members of the National Academy of Design. He wrote several books, among them Notes on Italy (1831) and Reminiscences of Art and Artists (1845). In 1843 he devised a system of teaching drawing and penmanship for Philadelphia public schools.

Peale was one of the first of American lithographers. He was an excellent draftsman, but in color his work cannot rank with that of his father.

His portraits include those of President Jefferson, Chief Justice John Marshall, French sculptor Jean-Antoine Houdon, and an Equestrian Portrait of George Washington.

I wish to have no connection with any ship that does not sail fast; for I intend to go in harm’s way.