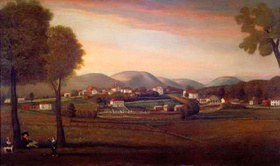 Ralph Earl, American painter, was born in 1751 in Shrewsbury (or perhaps Leicester) Massachusetts. His family was prominent locally. He — and his brother James — chose careers as artists at an early age. Self-taught, Earl started as an itinerant artist, or limner. He traveled throughout Massachusetts before establishing himself as a portrait painter in New Haven, Connecticut.

In 1774 he married his second cousin from Leicester, Sarah Gates, and within a few months they had a daughter. Nevertheless, they were rarely together; Earl returned to New Haven by himself. There he struck up a friendship with the painter Henry Pelham, half-brother of John Singleton Copley, and on a visit to Boston saw Copley’s work for the first time. The deep — and lasting — influence of Copley is apparent by 1775 when Earl painted the portrait of New Haven lawyer and politician Roger Sherman (who later signed the Declaration of Independence).

Within days following the Battle of Lexington / Concord (19-April-1775), Earl and Amos Doolittle, an engraver, were on the scene to document the engagement. The extent of Earl’s role is unknown, but since he was interested in landscape views, he probably created preparatory drawings that Doolittle worked from and perhaps adapted, then engraved. Earl may have also hand-colored some of the finished prints. What is known is that Doolittle produced and sold four scenes from the Battle that immediately became a core argument against British rule in the American colonies. Despite Earl’s own Loyalist leanings, he had helped produce extraordinarily effective propaganda that helped ignite the American Revolution.

Loyalists were often treated harshly, yet Earl refused to join the militia or pay taxes to support the war. Finally, fearing for his safety, he disguised himself as a servant to a British army captain and, leaving his wife and daughter behind, escaped to England in 1778.

The studio of American expatriate painter Benjamin West was a magnet for American colonial painters wanting to improve their craft. Copley and Charles Willson Peale had studied there, as would Gilbert Stuart, John Trumbull, and others. Of course, Earl became a pupil as well and rapidly learned the Grand Manner style of painting. He successfully attracted commissions from the English elite, including one to paint King George III. In both 1783 and 1784 Earl exhibited portraits at the Royal Academy of Art.

He also married — even though his first marriage had not formally ended. In Norwich Earl met Ann Whiteside, whose portrait he painted in 1784 and who became his second wife.

After seven years in England, Earl returned in 1786, with Ann, to what was now the United States. He was still married to Sarah in Leicester.

Attempting to establish himself in New York, he instead landed in debtors’ prison for nearly a year-and-a-half due to outstanding loans that he could not pay. While there, he was able to continue his work to pay off his debts, attracting clients who were willing to sit for an incarcerated painter. One of these was Alexander Hamilton’s wife, Elizabeth Schuyler Hamilton, who sat for him in 1787. Though prison was a personal setback, professionally this was one of Earl’s most productive periods. He was now embarking on the final phase of his career — the sixteen years where he adapted what he had learned in England and simplified it to accommodate American tastes.

Returning to Connecticut after his release (Jan-1788), Earl was itinerant once again, painting portraits of prominent citizens and families of the new republic. These portraits depicted people in their everyday surroundings, frequently with countryside in the background. He also painted several important Connecticut landscapes, including the Landscape View of Old Bennington (1798), which slyly includes a small self-portrait.

Earl’s final years were spent battling alcoholism. His work towards the end of the 1790s was erratic and of uneven quality. He alienated patrons and lost commissions. He took on students, including his son from his second marriage, Ralph E.W. Earl — who went on to become a successful portraitist in his own right.

Ralph Earl died in Bolton, Connecticut, in 1801. According to the local pastor, he died of intemperance — but in Boston one of the newspapers (Columbian Centinel, 9-Sep-1801) gave notice of his death perhaps more truly: Mr. RALPH EARLE, Æt. 50, a celebrated portrait painter.

The disarrayed condition of the colonies in 1764 — economies and societies in flux with changes wrought by war, governments trying simultaneously to adjust to international peace and cope with the effects of Indian insurrections — helps explain how the colonists reacted to British efforts to reform imperial relations.… But the single most significant factor was the depression that by 1764 had fastened a clammy grip on trade in every colony, and which would not fully release it until the decade had ended.

All men having power ought to be distrusted to a certain degree.