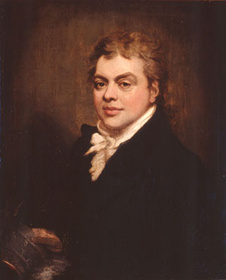 Mather Brown, an American-born painter active in England, was born in Boston in 1761. A descendent of four generations of religious leaders (including Increase Mather) on his mother’s side, his father, Gawen Brown, was a clockmaker. His mother, Elizabeth Byles Brown, sat for John Singleton Copley in the same year she died, 1763, when Brown was not yet two. He was raised by two maternal aunts, both staunch Loyalists.

According to Brown himself, Gilbert Stuart learnt me to draw at age 12. At age 16, he walked upstate New York selling wine and painting miniature portraits, from which he earned enough money to further his artistic studies. In 1781, age 19, he left for London. It was at the recommendation of Benjamin Franklin that he became a student of Benjamin West, in the studio that nurtured other young American painters, including John Trumbull, who became his friend.

In 1782 Brown became the first American to enroll in the school of the Royal Academy of Art. He exhibited four paintings the following year and opened his own studio, a year later, in 1784. Notable among his early successes were individual portraits of John Adams, his wife Abigail, and their daughter, Nabby, who all sat for him in 1785. Brown completed a second portrait of John Adams and the first known image of Thomas Jefferson in 1788.

Simultaneously Brown worked on large-scale works from English history, and though he had a number of successes, he eventually concentrated on portraiture. By the end of the decade he was so highly regarded that he became the official portraitist to King George III’s second and third sons. He painted a portrait of the king-in-waiting — the Prince of Wales — and, in 1790, he painted the King.

Brown’s swift ascent was matched by his rapid decline.

Never elected to the Royal Academy, his patronage abated. Within ten years he was struggling to find commissions. In 1808 he left London and eventually settled in Manchester, where he took on pupils.

By 1812, when Brown painted his self-portrait for his aunts in Boston, he was chronically in debt, and they periodically sent him money. He wrote to them about his situation:

I could fill a long letter with the various lamentable difficulties experienced by individuals here in consequence of the stagnation of business; Warehouses laden with Goods for which there is no market — I have many Pictures to dispose of and have placed them for months in various Shops, but cannot dispose of them. (27-Mar-1812)

He returned to London in 1824. Though Brown periodically exhibited, by the time of his death, in 1831, he lived in a boarding house — an impoverished recluse, long forgotten.

In every human breast, God has implanted a principle, which we call love of freedom; it is impatient of oppression and pants for deliverance.