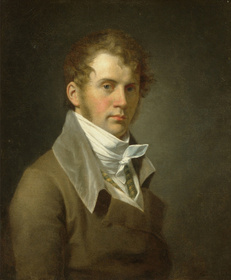 Portrait of the Artist, age 25, by Vanderlyn

John Vanderlyn, American painter, was born in 1776 at Kingston, New York. He was the grandson of a Dutch emigré painter and the son of a glazier-painter and dealer in painting supplies.

He was employed by a print-seller in New York and was first instructed in art by Scottish-born painter Archibald Robertson (1765 - 1835), who was later one of the directors of the American Academy of Fine Arts in New York. He made copies of some of Gilbert Stuart’s portraits, including one of Aaron Burr – and it was Burr who arranged to have Stuart take him on as a pupil in Philadelphia.

In 1796 Vanderlyn went to Paris, then in 1805 to Rome, where he painted his picture of Marius amid the Ruins of Carthage, which received a gold medal when it was shown in Paris. This success caused him to remain there for seven years, during which time he prospered greatly. In 1812 he showed a nude, Ariadne Asleep on the Isle of Naxos, which increased his fame.

Vanderlyn returned to America in 1815, but did not meet with success. He worked very slowly, and neither his portraits nor various panorama which he exhibited brought him any considerable financial return.

In 1842, through friendly influences, he was commissioned by Congress to paint The Landing of Columbus for one of the panels in the rotunda of the Capitol at Washington. Going to Paris, he employed a French artist to assist him, who, it is said, did most of the work.

Vanderlyn was the first American artist to study in France instead of in England. His paintings adapt the French neo-classical style for American audiences. He painted portraits of Presidents, including George Washington (a copy of Stuart’s Lansdowne portrait for the House of Representatives), James Madison, James Monroe, Andrew Jackson and Zachary Taylor; New York statesmen Robert R. Livingston and George Clinton; and South Carolina statesman John C. Calhoun.

The greater the chaos, the greater will be your merit in bringing forth order.