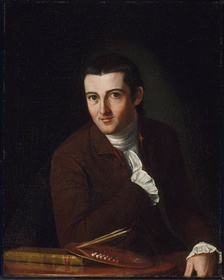 John Trumbull, American artist best known for his historical paintings depicting events from the American Revolution, was born at Lebanon, Connecticut, in 1756. His father was Jonathan Trumbull (1710 - 85), Governor of Connecticut (1769 - 84).

He graduated from Harvard in 1773. As a volunteer in the Continental Army during the American Revolution, he rendered particular service at Boston by sketching plans of the British works, and was subsequently appointed second aide-de-camp to George Washington. In June 1776 he became Deputy adjutant general to General Horatio Gates, with the rank of colonel, but resigned from the army in 1777.

Trumbull went to London in 1780 to study under Benjamin West. But his work had hardly begun when, after the news of the arrest and execution of Major John André (who was implicated in the treason of Benedict Arnold), he was imprisoned for seven months as retribution — since, like André, he too had been an adjutant general.

In 1784 he was again in London working under West, who suggested a series of American historical paintings that ultimately became the core of his artistic legacy. In West’s studio he painted the death of General Warren in The Battle of Bunker’s Hill and Death of General Montgomery.

Trumbull went to Paris in 1785, where he made portrait sketches of French officers for The Surrender of Cornwallis, and began — with the encouragement of Thomas Jefferson — The Declaration of Independence. These paintings, along with The Surrender of Burgoyne and The Resignation of Washington, were the four paintings commissioned by the U.S. Congress in 1817 to be enlarged for the Rotunda of the Capitol in Washington, DC.

Trumbull expected to profit from engravings of his historical paintings. While early sales of the prints seemed positive, in the end, only 344 were sold — not nearly as many as he had hoped. Discouraged, he went to London in 1794 as secretary to John Jay and stayed there until 1804, working occasionally as a portrait painter.

As a portraitist he had great financial success while in New York from 1804 to 1808. But since he could not secure a Federal commission (he had fallen out with Jefferson, now President, a decade before), he went back to London in 1808 and remained there until 1816.

Although the four paintings executed for Congress between 1817 and 1824 are stiffer than the originals, they became the crowning achievement of Trumbull’s artistic career when they were installed in the Capitol Rotunda in 1826. They were also his last major history paintings.

In 1831 Trumbull founded the Yale University Art Gallery when he gave 88 paintings to the college in return for an annuity of $1000. He designed the Picture Gallery that opened to the public in October 1832.

As president of the American Academy of Fine Arts in New York (1816 - 25), his classical idea of painting clashed with the increasingly romantic style supported by the students.

Trumbull’s own portrait was painted by Gilbert Stuart and by many others. He died in New York in 1843.

A fondness for power is implanted, in most men, and it is natural to abuse it, when acquired.