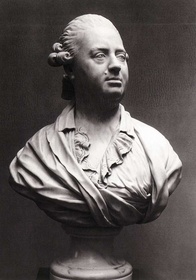 Jean-Antoine Houdon, French sculptor who also created definitive busts of American Revolution luminaries, was born at Versailles in 1740. At the age of 12 he entered the Ecole Royale de Sculpture, and at 20, having learned all that he could from Michel Ange Slodtz and Pigalle, he carried off the Prix de Rome and left France for Italy, where he spent the next ten years of his life.

His brilliant talent, which seems to have been influenced by the world of statues with which Louis XIV peopled the gardens of Versailles — rather than by the lessons of his masters — delighted Pope Clement XIV. After seeing the St. Bruno executed by Houdon for the church of St. Maria degli Angeli, the Pope reputedly said said he would speak, were it not that the rules of his order impose silence.

In Italy Houdon experienced the second Renaissance first-hand, and the direct and simple treatment of the Morpheus which he sent to the Salon of 1771 bore witness to its influence. This work procured for him his admission to the Academy of Painting and Sculpture, of which he was made a full member in 1775.

Between these dates Houdon was very active. He created busts of Catherine II and Diderot for the Salon of 1773; for the one in 1795 he produced not only his Morpheus in marble, but busts of the musician Gluck (in which the marks of small-pox in the face were reproduced with striking effect), Iphigeneia, and his well-known marble relief, Grive suspendue par les pattes. He took also an active part in the teaching at the academy and executed for the instruction of his pupils the celebrated l'Écorché (Flayed Man).

Each year Houdon was a chief contributor to the Salon and most of the leading men of the day were his sitters. Moliere, Voltaire, d’Alembert, Prince Henry of Prussia, Gerbier, Buffon, and Mirabeau are remarkable portraits; and in 1778, when the news of Rousseau’s death reached him, Houdon started at once for Ermenonville, where he took a plaster cast of the dead man’s face, from which he produced the grand and life-like head now in the Louvre.

In 1785, Thomas Jefferson arranged for Houdon to accompany Benjamin Franklin on his return to America in order to execute a a commission, from the state of Virginia, to create a sculpture of George Washington.

Houdon always worked from life, so he spent two weeks at Mount Vernon working on preliminary sketches and measuring and observing the General. As was his usual practice, Houdon created a terra cotta model, but with Washington he also created a plaster life mask. He had Washington lie down, coated his face with grease and covered his eyes before applying plaster; two quills in his nostrils allowed Washington to breathe. Afterwards, Houdon sculpted Washington’s eyes. When he returned to Paris he worked with these these as models, between 1786 and 1795, to sculpt a marble life-sized statue for the Virginia Capitol at Richmond. Houdon also used the life-mask to create other sculptures of Washington as well.

After his return to France, Houdon sculpted La Frileuse, (Winter) — a naif embodiment of shivering cold — as a companion to an earlier statue of Summer. It became, and still is, one of his most popular works.

With the French Revolution in 1789 interrupting his busy flow of commissions, Houdon took up a half-forgotten project for a statue of St. Scholastica. He was immediately denounced to the convention, and his life was only saved by his instant and ingenious adaptation of St. Scholastica into an embodiment of Philosophy.

He made a nude statue of Napoleon in 1806, but otherwise received little employment from the Emperor. He was, however, commissioned to execute the colossal reliefs intended for the decoration of the column of the Grand Army at Boulogne, but ultimately it was used elsewhere. He also produced a statue of Cicero for the senate, and various busts, including Josephine and Napoleon, from whom Houdon was rewarded with the Legion of Honor.

... Washington had made every mistake in the book in the New York campaign. He had misread the enemy’s intentions; he had divided his forces in the face of superior numbers; he had provided no cavalry; he had hesitated almost fatally to get his army out of Manhattan once he grasped the folly of keeping it there; he had allowed Greene to persuade him against his better judgment to keep men in Fort Washington; he had allowed a wealth of precious tents, flour, ordnance, and ammunition at Forts Washington and Lee to fall into enemy hands.

Ubi libertas ibi patria.
(Where liberty is, there is my country.)