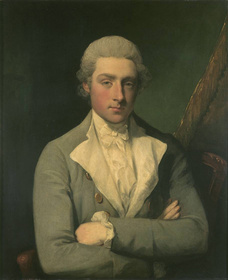 Gilbert Stuart, American painter known especially for his iconic images of George Washington, was born at Sauderstown, Rhode Island in 1755. His father, a native of Perth, Scotland and the son of a Presbyterian minister, had set up a snuff mill in Narragansett and was known as the snuff-grinder. He studied at Newport under Scottish artist Cosmo Alexander, and went with him to Scotland, but returned to America after Alexander’s death.

In 1775 he went to England; in 1778 he became a pupil of Benjamin West. Stuart’s work, however, shows none of the influence of West, and after four years Stuart set up a studio for himself in London, which met with much success. There he painted George III and the future George IV. In Paris he painted Louis XVI. Living beyond his means he got into financial difficulties, and in 1788 escaped to Dublin, where he was also successful.

After five years in Ireland, Stuart went to New York (1793), then opened a studio in Germantown, Pennsylvania. Early in 1795 Stuart painted his first of three portraits of George Washington.

Washington was 63 and in his second term as president. Said to be the only person in whose presence Stuart found himself embarrassed, the painter tried to strike up a conversation in order to have the great man relax his face — Now, sir, you must let me forget that you are General Washington and that I am Stuart the painter. Washington replied politely, Mr. Stuart need never feel the need of forgetting who he is, or who General Washington is. His first portrait of Washington (the Vaughan portrait) was, he felt, a failure — though he did make and sell some 12 copies. But Washington sat for him again, the result being the full-length portrait painted for the Marquess of Lansdowne.

The third painting, the Athenaeum head on an unfinished canvas showing the left side of the face, is Stuart’s famous image of Washington, and it remains the most popular likeness. Though commissioned by Washington (along with one of his wife, Martha), Stuart retained the portrait and used it to paint 130 copies which he sold for $100 each. It is the image featured on the United States one dollar bill for more than a century.

Stuart settled in Boston in 1805. A profligate spender throughout his life, he had unpaid creditors everywhere he lived, and at his death in 1828, he left his family deeply in debt.

A preeminent colorist, along with his technique and insight into character, make Stuart not only one of the great artists of the Revolution, but one of the masters of portraiture. A marked feature of Stuart’s work is the total absence of lines, his work being painted with a brush from the beginning. It is this process that gives to his modeling its strength and rotundity. His practice was to lay all the tints in their places separately and distinctly alongside of each other before any blending was used, and then they were united by means of a large soft brush without corrupting their freshness.

Quotes and snippets from Jefferson have been used to suggest that he altered his views on slavery, or that these were inconsistent with each other. He can be quoted to sound like an ardent abolitionist, or to sound like the most oppressive of masters. But everything he wrote on the subject is consistent with the complex treatment he gave to slavery in his Notes [on Virginia]. He always opposed enslavement in general and further slave imports to Virginia in particular. He always supported the freeing of slaves en masse, but always and only in connection with a scheme of deportation ...

All heredity government is in its nature tyranny.