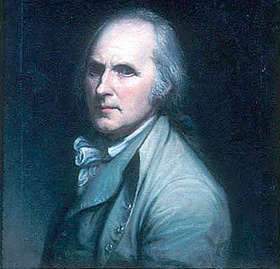 Charles Willson Peale, American painter — celebrated especially for his portraits of George Washington and his gallery of important figures from the American Revolution, was born in Queen Anne County, Maryland in 1741. During his infancy the family moved to Chestertown, Kent County, Maryland; after the death of his father (a country schoolmaster who had fled England because of embezzlement) in 1750 they settled in Annapolis. There, at the age of 13, he was apprenticed to a saddler.

About 1764 he began serious study of art. He received some assistance from Gustavus Hesselius, a Swedish portrait painter then living near Annapolis, and from John Singleton Copley in Boston. From 1767 - 70 he studied under Benjamin West in London.

Returning to America he opened a studio in Philadelphia in 1770 and met with immediate success. In 1772, at Mount Vernon, Peale painted a three-quarters-length study of Washington (the earliest known portrait of him), in the uniform of a colonel of the Virginia Regiment from the French and Indian War.

He painted various other portraits of Washington; probably the best known is a full-length, George Washington at Princeton (1779), of which Peale made many copies. This portrait had been ordered by the Continental Congress, which, however, made no appropriation for it, and eventually it was bought for a private collection in Philadelphia, and is now at the Pennsylvania Academy of Fine Arts (which Peale co-founded in 1805).

Peale’s portraits of Washington may not be as iconic as those of Gilbert Stuart, but he was a skilled draftsman and colorist, and the range of his subjects gives to all of his work an unmatched historical value.

Peale moved to Philadelphia in 1777. He served as a member of the committee of public safety; aided in raising a militia company by painting battle flags, creating effigies of traitors for political parades, and creating designs for publication; experimented with manufacturing (sorely needed) gunpowder; became a lieutenant and afterwards a captain in the Pennsylvania militia; and took part in the battles of Trenton, Princeton, and Germantown. In 1779 - 80 he was a member of the Pennsylvania assembly, where he voted for the abolition of slavery — he freed his own slaves whom he had brought from Maryland.

Peale can be considered the photographer of the Revolution, because of his many bust-type paintings of the famous men of his time. While in the militia he painted miniatures of various officers in the Continental Army, and then later produced enlarged versions. His biographical portraiture, many of which can be seen at the Second Bank of the United States, was his founding project to create a pantheon that would perpetuate American republicanism and values.

In 1801 he undertook, largely at his own expense, the excavation of the skeletons of two mammoths in Orange and Ulster counties, New York. The reconstructed skeleton from the first excavation was later exhibited in his museum and memorialized in his painting The Exhumation of the Mastodon.

The establishment in 1802 of Peale’s Museum in Philadelphia, combined the artist’s interests in natural history and painting. The first museum in the United States — and very much a business — it provided for the first time to Peale and his family a steady stream of income (with annual receipts of $8,000 by the time of his death). At age 83 Peale painted a full-length portrait of himself, The Artist in His Museum, which shows him pulling back the curtain to his museum as if it were a theater.

He died at his country home, near Germantown, Pennsylvania in 1826.

Wounds [from battle] were first cleansed with lint, either dry or wet with oil, and bandaged lightly. Later they were to be washed with a digestive — a substance used to draw pus — and then covered with a bread-and-milk poultice, with oil for moisture. For the first twelve days, a cooling regiment of medicines and diet was recommended, on the theory that this lowered the danger of infection. The empiricists among the medical men of the time had noticed that a man ran a fever with an infection, and concluded, with somewhat superficial logic, that keeping him cool would lower the chances of the infection taking root.

Unfortunately, there was little or no interest in using clean bandages or instruments.